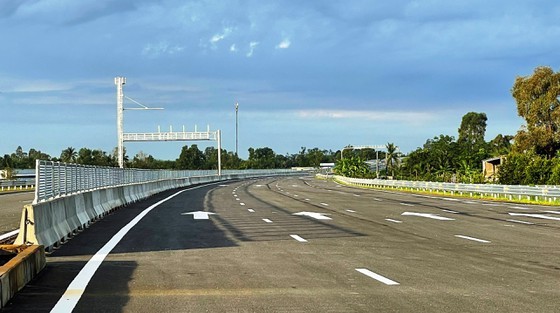 “Currently, the project is in the crunch time to be on schedule. There are only about 10 kilometers that need to finish the surface. From now to November, the construction units will complete the asphalt surface of this remaining part of the road and construct the traffic safety system, road signs, and communications. The company strives to complete the project by the end of this year to serve the travel demand during the Lunar New Year," said Mr. Nguyen Tan Dong, General Director of Trung Luong - My Thuan BOT Joint Stock Company.

Therefore, when the Trung Luong - My Thuan project is completed at the end of this year, it will be hard to come into operation because it has not been connected to the toll collection system of the HCMC - Trung Luong Expressway to collect tolls.
In related news, the Ministry of Transport (MoT), on October 25, organized two delegations to inspect passenger transport in some provinces across the country. The results show that Covid-19 prevention measures have been implemented strictly and following regulations at many bus stations. However, the number of vehicles and passengers remains small.
In Hanoi, only four provinces have agreed to resume inter-provincial passenger transport. From October 13 to now, there have been nearly 100 bus trips, transporting about 3,500 passengers. In Hai Duong Province, eight provinces and cities have agreed to resume passenger transport with 23 active vehicles. The province also proposed to reopen only passenger transport from the Central northwards and continue to suspend passenger transport from the Southern ones.

Thus, up to now, many inter-provincial transport routes have not been able to operate due to the lack of consensus from the convective provinces. Many transport businesses have suggested the Ministry of Transport consider no need for consensus for localities that have returned to normalcy. And the Departments of Transport can decide to reopen passenger transport by themselves and notify the destination department.