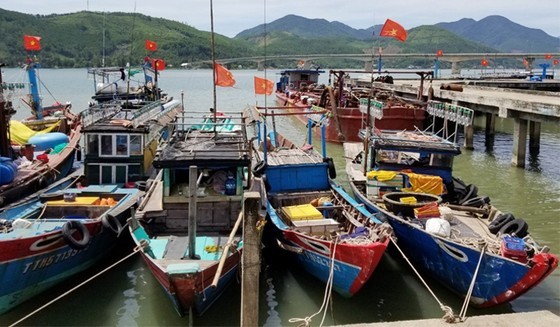 Thua Thien – Hue prepared for evacuation of nearly 100,000 residents
This morning, the Steering Committee for Disaster Prevention and Control of Thua Thien - Hue province said that by 9:00 am, 17 fishing boats with 156 laborers engaged in fisheries activities were still at sea. The Border Guard Command of the province has contacted these boats trying to guide fishermen to the shore to anchor their boats to avoid Typhoon Noru which is expected to come ashore in the morning of September 26.
Officers and soldiers in all military forces were mobilized to give guidance to fishermen on how to arrange their boats into storm shelters at Thuan An fishing port, Tu Hien fishing port, and other mooring areas.
Also this morning, the People's Committee of Thua Thien - Hue Province directed the Department of Industry and Trade to have a provincial reserve plan of food and foodstuff, technology products and essential supplies for disaster prevention.
In addition, localities themselves stockpile at district and commune levels and mobilize people to stockpile food for seven days for the probability of occurrence of natural disasters.
Noticeably, local administrations should prioritize the evacuation of children, the elderly, pregnant woman and those with children under 12 months old, people with disabilities, and people with serious illnesses.