Ambassador Chau often says that being an ambassador, he is tasked to provide security for Vietnamese citizens in 2020 when the coronavirus pandemic broke out and his task is similar to all of his international peers. He highly appreciated these Vietnamese diplomats who have organized thousands of flights bringing more than 60,000 Vietnamese citizens around the world back to Vietnam with the motto “No-one is left behind”.
There have been stories of challenges in evacuation of Vietnamese residents amid the coronavirus pandemic. Worse, evacuation of Vietnamese people in India was more difficult as small groups of Vietnamese people live in scattered disadvantaged places during lockdown time.

It took two months for preparation of the first campaign named Hoa Kim Tuoc to bring Vietnamese people back which was organized on May 19, 2020 - Late President Ho Chi Minh’s birthday. Stranded people in India include not only staff on business, students, tourists, technicians, investors but also laborers, Buddhist followers and monks who had limited budgets.
Ambassador Chau and all staff in the Embassy had been on the run finishing paper works for flights, visa extension as well as providing foodstuff for poor people and raising money to buy air tickets for those who are unable to afford it. Eventually, 66 buses and three domestic flights carried all Vietnamese people from 15 states of India in time at the airport in New Delhi for the flight to return to Vietnam. Ambassador Chau shared that he and his colleagues had sometimes given up to the organization of the flights because of complex paperwork.
In her thanks-you letter, Trinh Thi Ut - one of 11 monks studying at Acharya Nagarjuna University in India – wrote that she and her Vietnamese classmates had fallen into desperation because they bumped into different difficulties. At these times, the monk received encouragement and sharing from Ambassador Chau and other staff of the Embassy of Vietnam in New Delhi through phone calls and text messages during the memorable time.
When they all returned to Vietnam, some of them considered Ambassador Chau as their brother while others wanted to give gifts to the devoted ambassador to show their gratitude to him whereas Ambassador Chau has just thought that was one of his duties as an ambassador assigned by the country.
After the successful flight from India, these staff of the Vietnam Embassy in India, Bhutan and Nepal continued organizing flights taking back Vietnamese citizens from India, Nepal, Bhutan, Sri Lanka, and the United Arab Emirates to Vietnam. Ambassador Chau named all flights with a symbol flower of each country like Rhododendron- known as the Nepal national flower, Lotus - the National Flower of India, Himalayan blue poppy – the national flower of Bhutan, Tribulus Omanense - the national flower of the UAE. Though the names of flights are gentle and soft, the real work in fact was very hard because he both protected the safety of Vietnamese citizens in the epidemic and finished his duties as an ambassador keeping his staffs safe from contracting the disease as India has had the world’s second-highest coronavirus caseload behind the US.
However, he unexpectedly got the fatal disease along with some of his staff. In spite of pre-supposing this, they worried a lot these days. He said that they didn’t absolutely inform anyone even relatives and family members but just some other staff in the Ministry of Foreign Affairs. Because they had prepared themselves that one day they could contract the disease, they ordered 4-5 beds in an infirmary and even planned to withdraw a certain amount of money to rent a plane to return to Vietnam if the situation became worse. 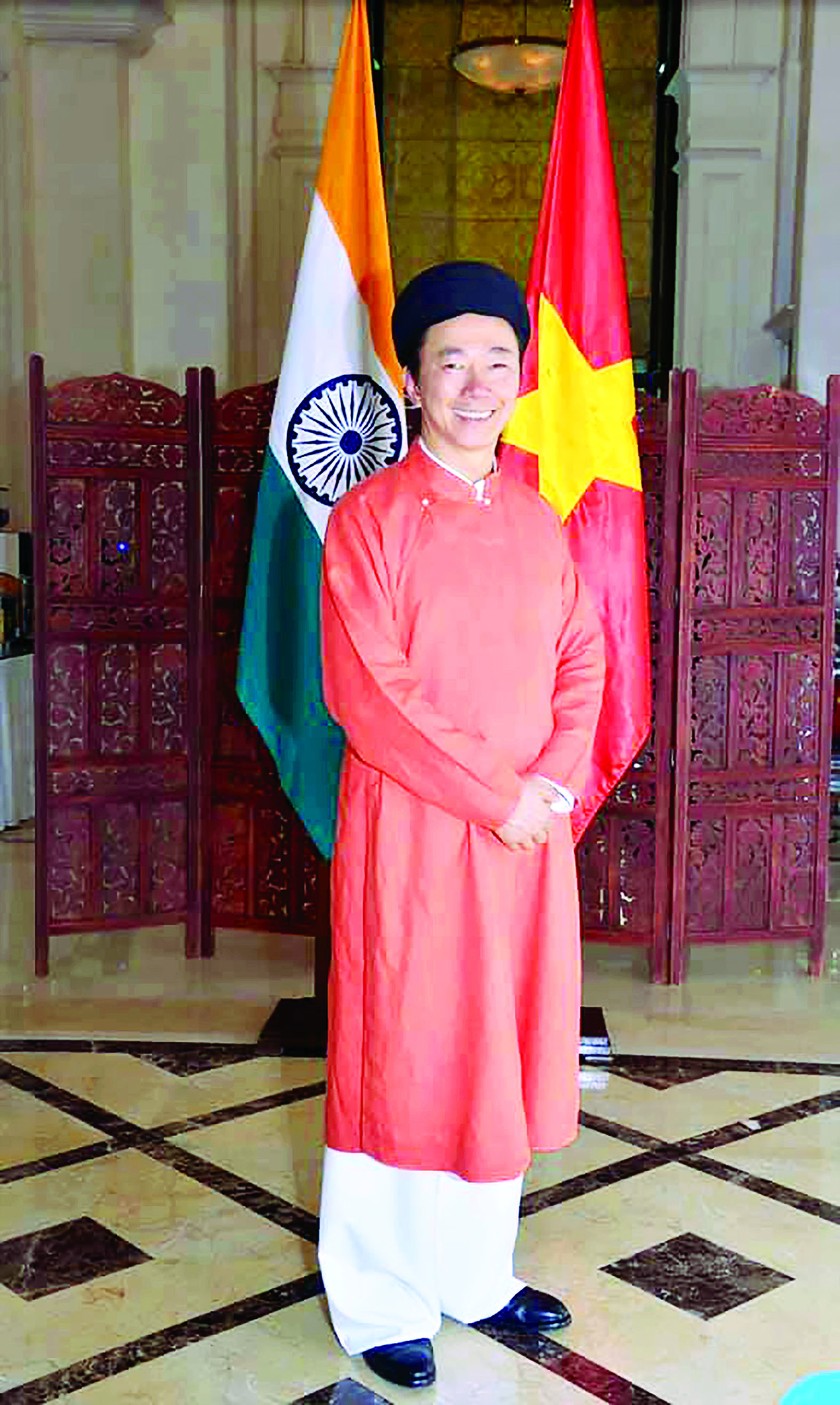 The Ministry of Foreign Affairs has organized a telemedicine so that physicians of Hanoi – based Hospital for Tropical Diseases and Bach Mai Hospital could examine the condition of the staff of the Vietnam Embassy in India including guidance of temperature measure, blood pressure measure, blood test and symptoms to have separate treatment for each case. Most of them stayed at home to receive medical guidelines except one who had been hospitalized.
The tragedy took place in September, 2020 when Ambassador Chau experienced fatigue and fever, most commone symptoms of Covid-19. He just only shared his feelings in a status update on facebook by sharing the status of Canadian ambassador Barbara Richardson that “Diplomats must work in places far away from their families and friends to help their citizens who are in difficulties. Their mission is to make sure nations in the world connect each other. Amid the coronavirus, they have sometimes lived in dangerous places and they are unable to return to their homeland even when they are sick.”
After reading his facebook update in the social network, some of his relatives, friends and followers could guess his health status but most of them supposed that his general worry when living in the epicenter of the deadly virus while others thought the status expressing his feeling as he couldn’t return to attend his daughter’s wedding ceremony. The fact that diplomats can’t be beside their relatives in important events is the biggest loss for them.
Eventually, all staff of the embassy recovered from the disease with a negative test result in December, 2020. Talking with SGGP reporters through a long phone call, Ambassador Chau revealed that he no longer contracted the deadly virus and happily added that his immunity to Covid-19 may persist six months or more.
Mr. Chau shared that 2020 must be a very sad year in human history regretting that due to the impact of the coronavirus pandemic, many of his plans couldn’t be performed. The direct flight Vietnam – India which was opened in December 2019 and other routes have not developed fully to push up tourism. Worse, bilateral trade between Vietnam and India dropped dramatically.
Nevertheless, he and his colleagues have built the Embassy, pushed up paperwork for the construction of President Ho Chi Minh statue in New Delhi as well as introduced HCL technologies into Vietnam with the aim of establishing a representative office in Hanoi and training 10,000 Vietnamese IT engineers.
He proudly said that the embassy had brought all Vietnamese citizens back to the country amid the pandemic.

By My Hang - Translated by Dan Thuy