Attending the ceremony, State President Nguyen Xuan Phuc, Party and State officials, and leaders of Phu Tho province offered incense and flowers in tribute to the Hung Kings, praying for the nation’s peace and prosperity. 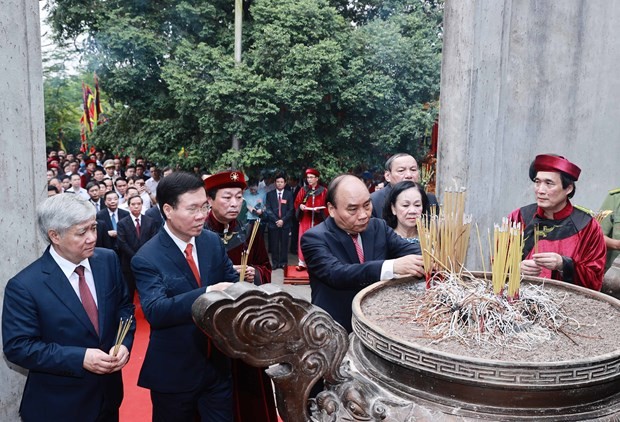 Chairman of the provincial People’s Committee Bui Van Quang spoke highly of the great contributions of the Hung Kings, the legendary founders of Van Lang - the first State in Vietnam, while praising the ancestors’ resilience in protecting the nation.
Following the incense offering ceremony, State President Nguyen Xuan Phuc and the delegates laid a wreath of flowers and offered incense at the tomb of the 6th Hung King, and paid tribute to late President Ho Chi Minh and martyrs at the relief featuring the late leader’s talk with soldiers from the Tien Phong Vanguard Division stationed at the relic site.

On the occasion of the death anniversary of the Hung Kings, many Vietnamese people from across the country and abroad paid homage to the national founders at the temple complex. 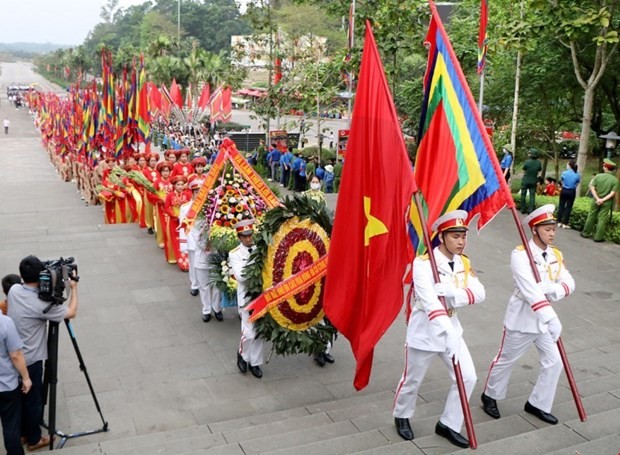 This year, many activities held on the occasion have been adjusted to suit the “new normal” situation, with COVID-19 prevention measures strictly put in place. The worship of the Hung Kings was organised to popularise the UNESCO Intangible Cultural Heritage of Humanity among Vietnamese nationals and foreign friends.

Legend has it that the eldest son of Lac Long Quan (son of Kinh Duong Vuong) and Au Co (the fairy daughter of De Lai) was made king. He named the country Van Lang and set up the capital in Phong Chau (modern-day Viet Tri city), beginning 18 dynasties of the Hung Kings.

The kings chose Nghia Linh Mountain, the highest in the region, to perform rituals devoted to the rice and sun deities to pray for healthy crops.

To honour their substantial contributions, a complex of temples dedicated to the kings was built on Nghia Linh Mountain, and the tenth day of the third lunar month serves as the national commemorative anniversary for the kings.

Earlier on the morning, President Phuc came to Tu Xa new-style rural commune in Lam Thao district, where he visited several public works like markets and stadiums, and met with local residents.

He asked the commune to speed up application of science and technology, and develop One Commune One Product (OCOP) products to better serve the market.