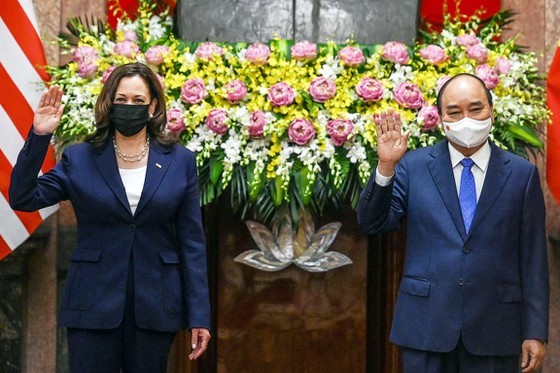 State President Nguyen Xuan Phuc hosts a reception for US Vice President Kamala Haris at the Presidential Palace in Hanoi. (Photo: SGGP)
At the reception, State President Nguyen Xuan Phuc affirmed the Vietnam’s consistent pursuit of the foreign policy of independence, self-reliance, openness, diversification and multilateralization of external relations and active international integration. On that basis, Vietnam always considers the US as a leading partner and hopes to further develop the deeper comprehensive strategic cooperative partnership on the basis of the principles of equality and mutual benefit, mutual respect for sovereignty and territorial integrity.

On this occasion, Mr. Nguyen Xuan Phuc expressed his thanks to President of the United States, Joe Biden for the donation of five million doses of vaccines to support Vietnam's Covid-19 fight. 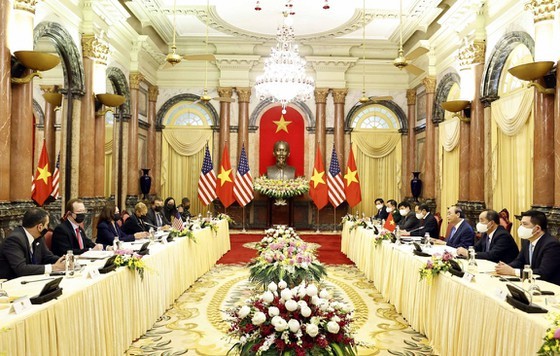 At the welcoming meeting (Photo: SGGP)
US Vice President Kamala Haris expressed her honor of the first Vice President of the United States of America to visit Vietnam.

She highly appreciated Vietnam’s efforts in controlling Covid-19 outbreak and affirmed that the United States will continue to support Vietnam to combat the pandemic.

Leaders of the two countries came to an agreement on enhancing cooperation in various fields, especially economic field, trade, national defense and security, health, IT, and recovery from the consequences of war.

State President Nguyen Xuan Phuc emphasized the importance of bilateral trade and economic system and the US - Vietnam agreement on currency policy, and congratulated the United States for hosting the Asia-Pacific Economic Cooperation (APEC) in 2023.

He committed that Vietnam will closely cooperate with the US towards the successful APEC meetings in 2023. 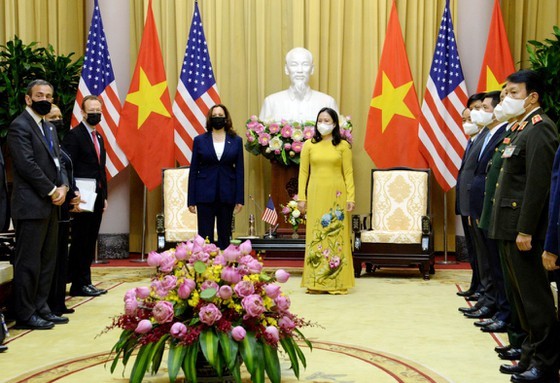 During her stay in Vietnam, Harris is scheduled to have meetings with Vietnamese leaders, including Prime Minister Pham Minh Chinh and attend the opening ceremony of a regional office of the U.S. Centers for Disease Control and Prevention in Hanoi to increase its public health engagement in Southeast Asia, and a Land Lease Agreement Signing Ceremony for the construction of a new premises of the US Embassy in Hanoi.