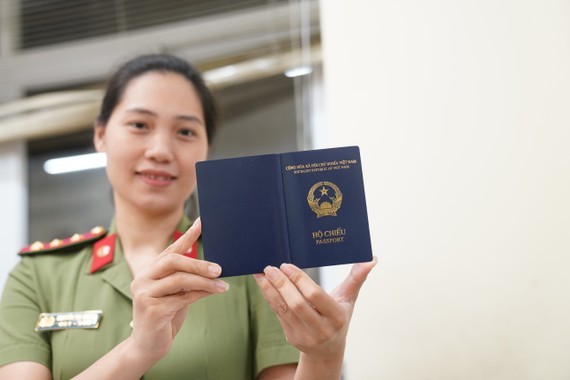 The new form of the Vietnamese passport. (Photo: SGGP)
According to the decision, after completing compulsory technical consultations, Spanish authorized agencies decided to accept the new passport form of Vietnam because it meets the required information in accordance with international regulations.

However, the “place of birth” is one essential piece of information on a passport for the identification of a person, and is mandatory to process Schengen visa applications. Vietnamese citizens possessing a passport in the new form have to submit their valid ID cards in their applications, the notice said.
The embassy noted that holders of the new passports applying for visas to Spain or European countries, according to Schengen regulations, visas issued on the new passports will not be valid to travel to the territories of the Schengen member states where Vietnam’s new passports are not accepted. Visa applicants who travel to those nations have to contact their embassies before departing.
A passport in the old form with a green cover showing the “place of birth” information that is not restricted from entering any Schengen member countries will continue to be accepted normally, added the Spanish Embassy in Vietnam.
Previously, the Spanish Embassy in Vietnam on August 1 announced that it would refuse visa issuance to Vietnamese people owning a passport in the new form (dark blue color) from July 1 due to a lack of information about their birthplace.