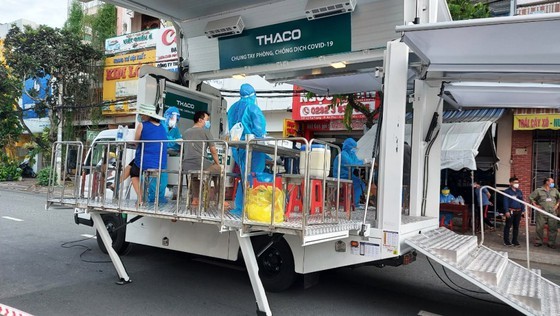 Particularly, the Steering Committee for Covid-19 Prevention and Control of Binh Duong Province has been speeding up the vaccination campaigns with a capacity of 100,000 doses a day as the number of coronavirus infectious cases reached 49,879 cases, including 402 deaths.
Binh Duong Province has administered 544,060 doses of vaccine against coronavirus allocated by the Ministry of Health, reaching nearly 21 percent of the province’s population. Besides that, the Southern province is carrying out the vaccination process with 250,000 doses of Astrazeneca vaccine and 15,210 doses of Pfizer within three days from the reception day of vaccine batches.

The People’s Committee of Long An province proposed the Ministry of Health allocate 600,000 doses, 600,000 doses, 850,000 ones and 495,520 ones in August, September, October and November, respectively after the province had performed vaccination for 126,144 people.

Sixteen percent of Tay Ninh province’s population got nearly 192,000 Covid-19 vaccine doses by August 16 and the Ministry of Health has just allocated 5,850 more doses to widen the vaccination for more and more people.

Two provinces of Ba Ria – Vung Tau and Tien Giang reached the vaccination rate of over 90 percent with 219,450 doses and 271,690 ones up to now, respectively.
Meanwhile, the Mekong Delta province of Soc Trang just performed vaccination of 132,300 doses for three phases, reaching only over ten percent of the province’s population.

The Steering Committee for Covid-19 Prevention and Control of Can Tho City yesterday said that the city had carried out five phases of vaccination with a total 246,785 doses, of which the number of people getting their first shot reached 18.6 percent of the city population and the number of people receiving their second shot was only 0.6 percent.

It is expected that the locality will be allocated over 1.7 million more doses dedicated for around 900,000 people by the end of this year.