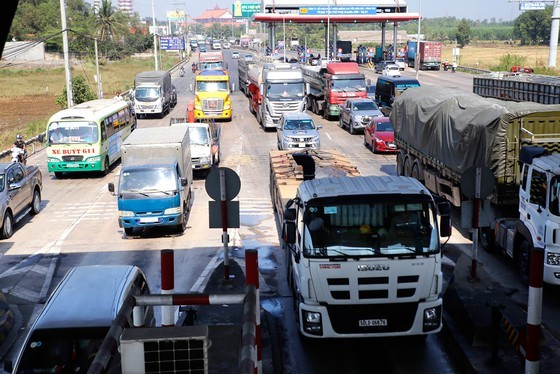 Vehicles passing a toll station on National Route 51. (Photo: SGGP)
Traffic through the three toll stations along National Route 51 in 2021 continues to rise. Most notably, the station called T2 has received 40,934 vehicles since the first quarter, four times the intended capacity, a 6.9 percent up year-on-year and nearly 70 percent up from 2015, according to BVEC, the investor of the toll station project.

BVEC had to let vehicles through the barricades without collecting fees multiple times due to severely high traffic volume, namely 16 times in 2019, 39 times in 2020, and 98 times in the first quarter of 2021 alone.
On the other hand, people in traffic would constantly try to cut in line, go in the opposite direction, or run red lights to avoid bottlenecks, causing more chaos and road crashes on the route.
Official statistics showed 93 traffic accidents on the route in 2020, killing 39 people, injuring 82, and damaging 123 vehicles.
According to the Road - Railway Traffic Police in Ba Ria - Vung Tau, there were 20 traffic accidents in the first quarter of 2021 alone, resulting in 17 casualties and 8 injured.
Relevant units of the Ba Ria – Vung Tau province are working urgently to resolve the problems, said the head of Road - Railway Traffic Police in Ba Ria - Vung Tau.
National Highway 51 was expanded to eight lanes in 2009. It is an arterial road connecting major industrial zones in Dong Nai, Binh Duong, and Binh Phuoc with various waterway ports in Dong Nai, HCMC and the and Cai Mep - Thi Vai port cluster in Ba Ria - Vung Tau.