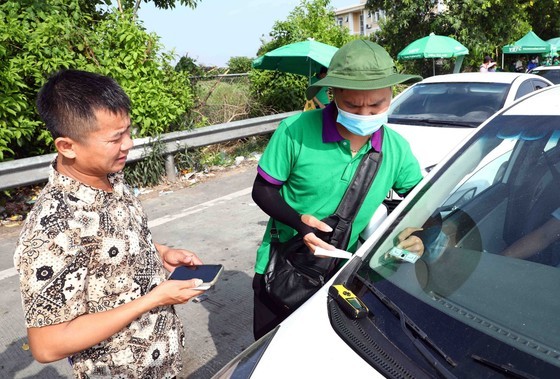 Employees of an ETC service provider is helping a vehicle driver to deposit money into his traffic account.

Only a minor quantity of banks like BIDV now allows this money transfer to ETC apps free of charge.

To encourage cashless payment, recently, various e-wallet companies like Momo, Grab have run promotion campaigns. With each customer depositing a few hundreds of thousands of VND, in total, these companies can earn a large sum via the overnight interest rate on the money of millions of customers.

Therefore, ETC service providers suggest that vehicle owners should transfer money free of charge to the bank account of VETC or VDTC instead. As to the proposal that banks should exempt service fees for money transfer to traffic accounts, the Transport Ministry should work with the State Bank of Vietnam to turn this into reality.

Economic expert Vu Dinh Anh commented that it is not wrong to collect service fee for such money transfers. However, during the time to encourage ETC use, related units like banks should create more favorable conditions for the public via fee exemption or minimization as a way to support the State’s policies.

Regarding the inquiry that a vehicle might still be charged a toll even when it is parked at home, VDTC replied that it is impossible, since the toll collection via an app depends on the stamp attached on each vehicle with its unique QR code.

Besides the normal QR code scanning via radio wave, VDTC has used a backup identification measure of scanning license plates. Therefore, to avoid the case of a vehicle purposedly using a fake license plate with an unreadable ETC card, VDTC has turned off the feature of identifying a vehicle via its license plate. Without a valid ETC card, there is no way for a vehicle carry out toll payment transaction.

Chairman of the Vietnam Automobile Transport Association Nguyen Van Quyen stated that to handle mistakes happening at toll plazas, both vehicle drivers and service providers need to share their responsibility. Meanwhile, functional agencies should urgently introduce regulations to specifically punish service providers for technical problems that cause damages or inconvenience to road users.