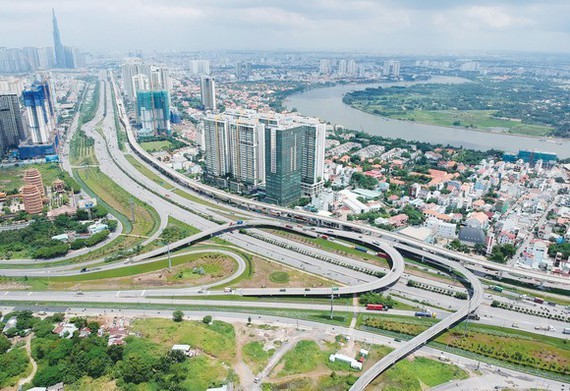 For the Ring Road No.4 in the Hanoi Capital Region and the Ring Road No.3 in HCMC, the Government proposes to diverge investment with a scale of four lanes, a design speed of 80km/h, and geometrical elements designed following freeway standards. Notably, both projects have many intersections and many elevated sections, making the total investment extremely large in the context of limited resources.

At the meeting, some opinions suggested considering the option of issuing local bonds to implement the project. Besides, it is also possible to invest in the form of PPP to ensure medium-term capital mobilization and to implement the policy of public investment guiding private investment following the Resolution of the Party Congress. Another factor to consider is the ability to supply construction materials in the context that some national key construction projects are also being rushed to deploy and are facing difficulties in building materials, affecting the progress of the project.

Concluding the session, Mr. Vu Hong Thanh, Chairman of the Economic Committee of the NA, asked the Government to clarify some issues, such as scope, scale, vertically or horizontally preliminary divergence design to ensure a smooth connection; implementation responsibilities, and allocated capital sources for parallel lines; intersections; land fund exploitation. Investment form, project component division, specific mechanisms and policies in project implementation, and exploitation of minerals as building materials are also issues that need careful calculation, the representative of the verification agency noted.

Seven out of 12 targets achieved

At the meeting, Deputy Minister of Planning and Investment Tran Quoc Phuong said that in 2021, the success in the prevention and control of the Covid-19 pandemic is an important condition for the transition to safely and flexibly adapt and effectively control the Covid-19 pandemic from the beginning of the fourth quarter of 2021.

Thereby, the economy has gradually recovered with many indicators after additional assessment having more positive results than reported at the second meeting. Seven out of 12 targets met and exceeded expectations. Of which, the average consumer price index for the whole year 2021 only increased by 1.84 percent, the lowest since 2016; the State budget deficit equaled 3.41 percent of GDP; trade surplus exceeded US$4 billion; foreign investment attraction achieved impressive results with a growth rate of 25.2 percent. However, some targets did not reach. Of which, it is important to pay attention to the target of increasing social labor productivity.

Delegates at the meeting highly appreciated the effectiveness of timely policies and resolutions of the NA and the Government. However, they also expressed concern about some potential risks, such as the high oil prices since the end of February, which has a chain effect on freight rates, production costs, logistics, commodity prices, and raw materials. The CPI in March edged up by 0.7 percent compared to the previous month, the highest from 2012 to now. Input and logistics costs increased, but consumption demand was weak. The disease is still spreading rapidly. Although the number of new infections decreases, it remains high, affecting the implementation of new normal policies.

Considering that the assessment of the business situation based only on the number of newly-established enterprises and the number of enterprises returning to the market is not accurate, Mr. Vu Tien Loc, Member of the Economic Committee of the NA, suggested that there should be a more realistic assessment, analyzing more clearly the subjective causes of some limitations and shortcomings. Meanwhile, a Member of the Economic Committee of the NA Bui Thi Quynh Tho paid attention to socio-economic development indicators that had not reached the set targets yet, such as GDP growth rate and the total factor productivity contributing to growth. “The total factor productivity from the previous term is still a noticeable issue and has not achieved the set target,” Ms. Bui Thi Quynh Tho expressed concerns and suggested the Government's report needs to specify groups of solutions to rationalize the use of capital and labor, innovate technology, and improve labor-management capacity.