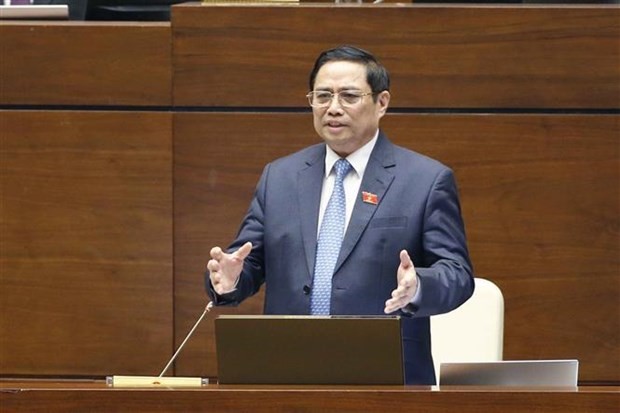 Prime Minister Pham Minh Chinh takes the floor at National Assembly’s Q&A sessions. (Photo: VNA)
Addressing deputies’ concern over difficulties and challenges, both short and long terms, to socio-economic development due to the Covid-19 pandemic, the PM said since October and early November, all-level agencies and localities have continued to take drastic actions to combat the pandemic.
He highlighted changes in the mindset and methods in this regard, shifting towards safely and flexibly adapting to and effectively control the pandemic, and efforts to remove difficulties to production and business, and reopen the economy according to a set roadmap.
Thanks to such efforts, progress has been made in socio-economic development, he said, adding that macro economic stability has been maintained and major economic balances have been ensured, with a low inflation rate.
During the first 10 months of this year, Vietnam ran a trade surplus of US$160 million, and attracted more than US$20 billion in foreign direct investment (FDI), up 15.8 percent year-on-year, he continued.
The leader also took note of good recovery in state budget collection, industrial production, agricultural development, services and the number of newly established enterprises. 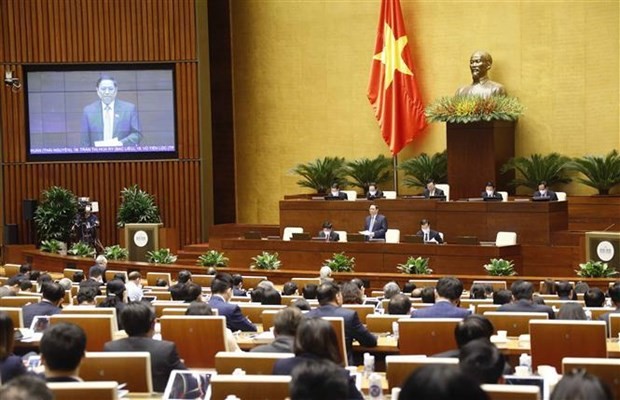 At the National Assembly's working session. (Photo: VNA)
Ministries and agencies have paid due attention to social welfare, notably policies towards laborers and employers, the PM said, stressing that positive changes in culture, social affairs, environment, administrative reform and the fight against corruption and other negative phenomena have helped to consolidate public confidence in the Party’s leadership and the State’s management.
National defense and security has also been consolidated and diplomacy, especially vaccine diplomacy, has been enhanced over the past time, he said.
The Government leader, however, pointed out that a range of difficulties and challenges remain ahead, including risks of the macro economy, inflation pressure, the shortage of laborers, and the disruption of production and supply chains, among others.
Given this, the Government has ordered synchronous and effective implementation of the set tasks and solutions, especially speeding up Covid-19 vaccinations nationwide and preparing treatment drugs.
The PM also said more efforts will be made in rolling out policies to support people and businesses, removing bottlenecks to production and business, and ensuring the circulation of goods and travelling of people, in order to achieve to the highest possible targets set for this year.