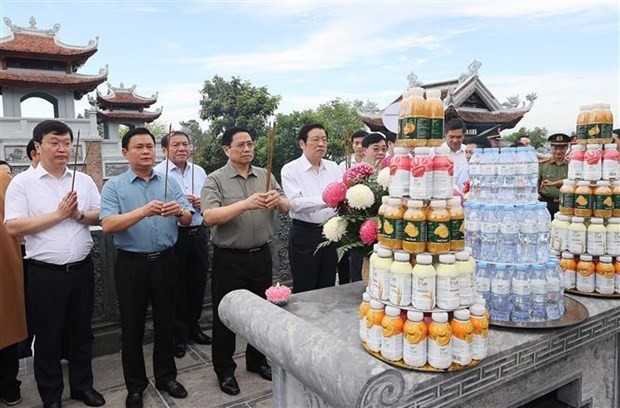 Prime Minister Pham Minh Chinh (3rd from left) and Party and Government officials pay tribute to late President Ho Chi Minh at the Chung Son pagoda (Photo: VNA)
Offering incense and wreaths at the Chung Son pagoda and the Kim Lien special national heritage site, participating officials expressed their deep gratitude for the late President’s significant contribution to the national revolutionary cause for independence, peace and happiness.
They vowed to follow Ho Chi Minh’s ideology, morality and lifestyle and join a concerted effort for successfully implementing the 13th National Party Congress’s resolution and building a strong and prosperous country.
At the Truong Bon historical site in Do Luong district’s My Son commune, they paid respect to the 1,240 martyrs, who died on the legendary Truong Bon road to protect the route.
From 1964 to 1968, the US dropped 18,936 bombs and tens of thousands of rockets onto Do Luong district, including Truong Bon area. However, tens of thousands of Vietnamese soldiers, youth volunteers and locals persisted in fighting the enemy and securing the route for trucks carrying support to the southern battlefield.
On October 31, 1968, 13 of the 14 youth volunteers of Company 317 were killed by US bombing in this area, a few hours before the US declared a halt to the bombing of the north of Vietnam. Since then, Truong Bon has been a symbol of the bravery of Vietnamese youth volunteers.