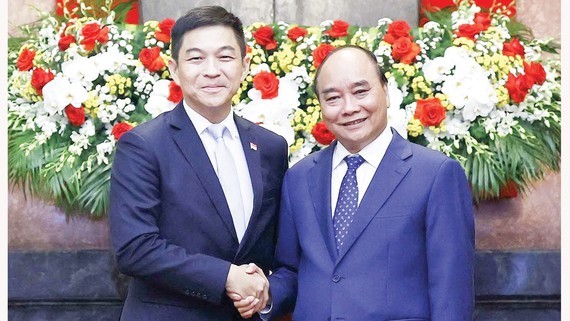 President Nguyen Xuan Phuc (R) and Speaker of the Singaporean Parliament Tan Chuan-Jin (Photo: VNA)
Bilateral trade is growing positively, with more and more Singaporean-invested projects in Vietnam, Phuc said, considering the Vietnam-Singapore Industrial Park (VSIP) model a symbol of economic collaboration between the nations.
He said he wishes for further bilateral cooperation in the field of human resources training, which serves as a firm foundation for both nations’ socio-economic development.
Speaker Tan, who is paying an official visit to Vietnam, said special celebration activities are earmarked for 2023, which marks the 50th founding anniversary of the countries’ diplomatic relations. On the occasion, the Singaporean Prime Minister wants to visit Vietnam, he added.
Expressing impressions on Vietnam's hosting of SEA Games 31, Tan said the organisation of the region's largest sport tournament helps boost people-to-people exchange among participating nations.
Telling his host about a memorandum of understanding between the Vietnamese and Singaporean parliaments, the top legislator considered it an important basis for tightening cooperation in contribution to the two nations' economic development.
Echoing Tan, President Nguyen Xuan Phuc said the two nations have paid great attention to collaboration in not only the economic field but also in the judicial and legislative sectors. Education, tourism, security and defence are also solid cooperation contents between Vietnam and Singapore, the State leader noted.
He wished that the two countries maintain ASEAN's common stances at international forums regarding the compliance with international law and 1982 UN Convention on the Law of the Sea (UNCLOS) to peacefully settle disputes and ensure security, safety, freedom of navigation and overflight in the East Sea.
The President also asked the Singaporean Parliament and the National Assembly of Vietnam to keep such stances at multilateral parliamentary forums, such as the AIPA, IPU, APPF, among others.