Also accompanying the leader were Chairman of the President's Office Le Khanh Hai, Chairman of the Foreign Affairs Committee of the National Assembly Vu Hai Ha, Minister of Planning and Investment Nguyen Chi Dung, and leaders of ministries, agencies and the Vietnamese Embassy in Japan.

President Phuc and the Vietnamese delegation laid flowers to pay tribute to the late "close friend of Vietnam," expressing respect for the special affection and valuable support and assistance that the Japanese former PM had extended to the country and people of Vietnam, conveying profound condolences to the Liberal Democratic Party, the Government, the National Assembly, the people of Japan and the family of late Shinzo Abe.

President Phuc also thanked Shinzo Abe for his attention and important contributions to the Vietnam-Japan relationship during his eight years as Prime Minister of Japan, which has left a notable legacy across all fields of cooperation from economic, investment, trade, to labour, people-to-people exchanges, etc.

The President said that the attendance of Vietnamese leaders at the funeral demonstrated the tradition of loyalty and affection of the country and Vietnamese people. 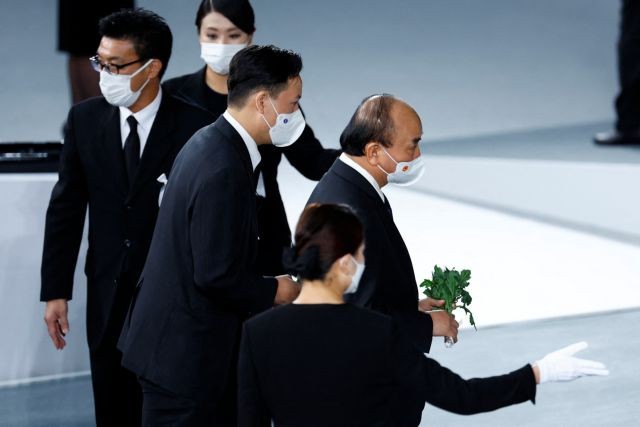 Vietnamese President Nguyen Xuan Phuc laid a floral tribute for the late Japanese Prime Minister Shinzo Abe during a State funeral held in Tokyo on Tuesday. — AFP/VNA Photo
Japanese Prime Minister Kishida Fumio and Shinzo Abe's widow Akie Abe thanked President Phuc for leading the high-ranking Vietnamese delegation to attend the State funeral, affirming that this was special recognition for the sentiments and contributions of the former Prime Minister Abe to the outstanding development of the traditional relationship between Việt Nam and Japan.