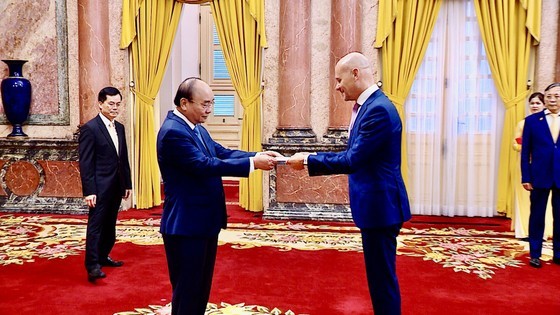 President Nguyen Xuan Phuc (L) and Ambassador of the Netherlands, Kees Van Baar (Photo: SGGP)
Receiving Dutch Ambassador Kees Van Baar, President Phuc thanked the Netherlands for providing Vietnam with 1 million Covid-19 vaccine doses.
On the back of the bilateral comprehensive partnership, he asked the European nation to invest big in Vietnam’s hi-tech and seaport sectors towards raising two-way trade to US$30 billion during the ambassador’s tenure.
He thanked the Netherlands for its support for Vietnam's candidacy for the United Nations Human Rights Council for the 2023-2025 tenure and noted that Vietnam backs the Netherlands' bid for a seat at the council for the 2024-2026 term. 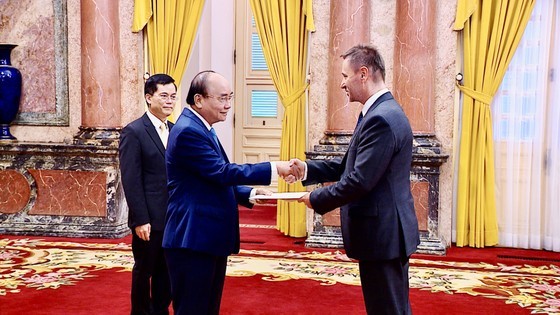 President Nguyen Xuan Phuc (L) and Hungarian Ambassador Baloghdi Tibor (Photo: SGGP)
On the occasion, he suggested the Netherlands and the European Union back Vietnam and ASEAN’s stance on protecting law abidance at seas and oceans; maintaining peace, stability, freedom, safety and security of aviation and navigation in the East Sea; and peacefully settling disputes in line with international law, including the 1982 UN Convention on the Law of the Sea (UNCLOS).
Kees Van Baar, for his part, said water management and climate change response should be one of the priorities in their bilateral ties. He also wished to enhance bilateral trade and investment and encourage Dutch firms to operate effectively in Vietnam.
As 2023 marks the 50th founding anniversary of diplomatic ties, he said Dutch firms will work with Vietnam to hold seminars and conferences to share experience in climate change response. The Netherlands will also push for the EU’s lifting of a “yellow card” warning on Vietnamese seafood, he added. 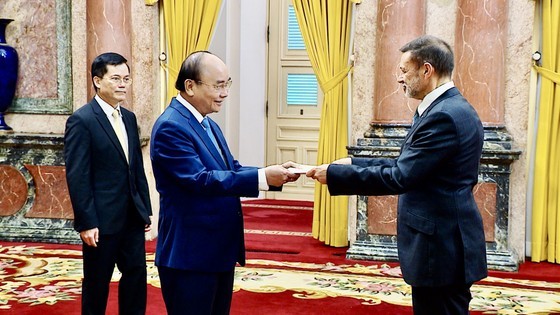 The President also hoped that Hungary will provide more scholarships for Vietnamese students and continue partnering with Vietnam in the supply of official development assistance.
Tibor, for his part, wished to promote high-level visits and people-to-people exchanges, including completing and screening a film on the bilateral friendship as well as boosting trade and investment cooperation.
In the meeting with Australian Ambassador Andrew John Lech Goledzinowski, the President expressed his delight at the debut of the Vietnam-Australia Centre in Vietnam. 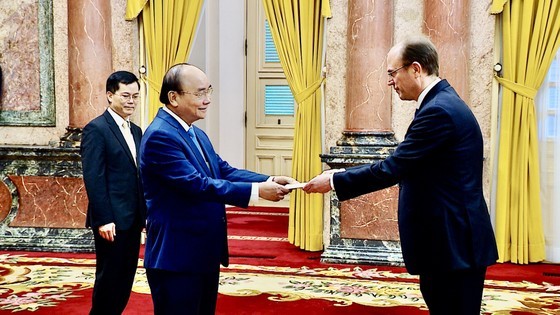 President Nguyen Xuan Phuc (L) and Ambassador of Luxembourg Patrick Hemmer  (Photo: SGGP)
He suggested Australia creates favorable conditions for its Vietnamese community and simplifies procedures for Vietnamese students to return to the country while reinforcing people-to-people exchanges, cooperation in climate change response, energy transition, digital economy and hi-tech agriculture.
President Phuc also wished that during his tenure, the ambassador would intensify bilateral collaboration in trade, investment, national defense-security, agriculture and labor, among others.
The State leader took this occasion to thank Australia for providing Vietnam with 22.2 million doses of Covid-19 vaccines, becoming the second biggest donor of Covid-19 vaccines for the Southeast Asian country.
The ambassador said Australia wants to upgrade bilateral ties to a comprehensive strategic partnership, and further deepen ties in healthcare.
On the occasion, he conveyed the Australian Governor-General's invitation to President Phuc to visit the country. 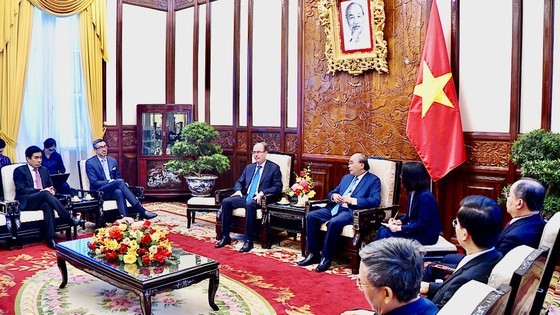 President Nguyen Xuan Phuc receives Ambassador of Luxembourg Patrick Hemmer. (Photo: SGGP)
At the reception for Ambassador of Luxembourg Patrick Hemmer, President Phuc stressed that Vietnam always gives priority to its friendship and cooperation with Luxembourg in its overall ties with the European Union.
Vietnam wants to cooperate with Luxembourg in various fields such as green development, education training and hi-tech, he said.
The President also proposed the European nation back Vietnam’s bid for a seat in the UN Human Rights Council for the 2023-2025 tenure and work closely with Vietnam to celebrate the 50th founding anniversary of diplomatic ties next year.
Hemmer agreed with the President’s proposal to lift two-way trade and investment ties, especially in the green economy.
Having thanked Vietnam for its support for Luxembourg's candidacy for the UN Human Rights Council in the 2022-2024 term, the ambassador said his country will back Vietnam at multilateral forums and its bid for a seat in the council for the 2023-2025 tenure.