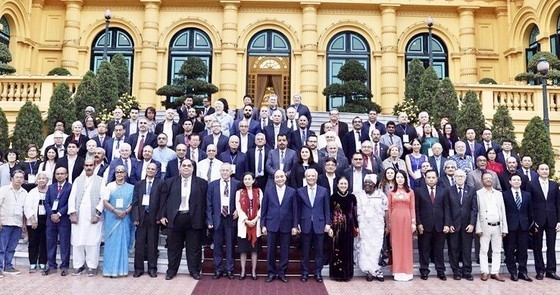 President Nguyen Xuan Phuc and delegates to the 22nd Assembly of the World Peace Council take a photo at the Presidential Palace (Photo: SGGP)
President Phuc affirmed the State and people of Vietnam always treasure and remember the support, strong solidarity and valuable assistance of international democratic and progressive organizations, including the WPC and its member organizations, for the struggle for national independence in the past, as well as national building and safeguarding today. 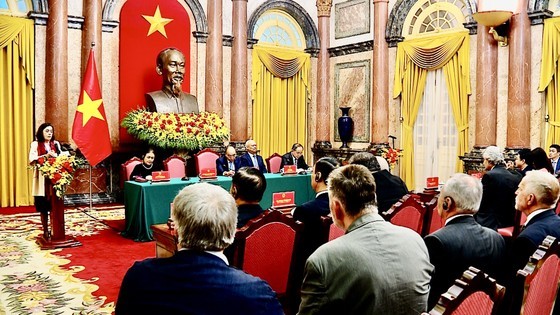 President Nguyen Xuan Phuc receives delegates to the 22nd Assembly of the World Peace Council. (Photo: SGGP)
He underlined that Vietnam and the WPC shared special ties. Vietnam was a founding member of the council in 1949, he noted, stressing that the support of the council and peace-loving countries for Vietnam is a vivid manifestation of the strength of great international solidarity, making an important contribution to the victories of the Vietnamese revolution in the past more than 70 years.
He praised the contributions of the WPC and its member organizations in preventing war and building a world of peace and justice, especially activities to support national liberation struggles of people in different countries and nuclear weapon disarmament, and help war victims.
The State leader thanked the council for actively supporting Vietnam at international forums, and assisting victims of Agent Orange/dioxin in Vietnam.

At the receiving ceremony (Photo: SGGP)
Highlighting the complicated global situation and risks to world peace, stability and development, President Phuc held that preventing conflicts and wars, eliminating inequality and injustice in international relations and building a world of peace and fair and sustainable development have become urgent requirements and earnest aspirations of progressive humanity around the world.
He expressed his belief that with its tradition and positive activities, the WPC will continue its noble mission in rallying and uniting the world's peace-loving, democratic and progressive forces in the struggle for a peaceful and just world and sustainable development. The President said he believes that the council's 22nd Assembly will be a great success with many practical initiatives and action programs to promote international peace and solidarity.
The President affirmed that Vietnam always attaches importance to and upholds the basic principles of the United Nations Charter and international law on respect for independence, sovereignty, territorial integrity, non-interference in the internal affairs of countries, not using or threatening to use force in international relations, the settlement of disputes by peaceful measures based on international law. Vietnam is a friend, a reliable partner and a responsible member in the international community, he stated.

Delegates attend the 22nd Assembly of the World Peace Council. (Photo: SGGP)
Vietnam has always been faithful to its traditional friends, steadfastly united, and supported the peoples of all countries in the struggle for peace, national independence, democracy and social progress, for a world of justice and sustainable development, said the President.
He noted that after more than 35 years of renewal, Vietnam has grown strongly with many positive and comprehensive changes and numerous achievements of historical significance.
The country's economy has been continuously growing at an average rate of nearly 7 percent per year, with a stable socio-political situation and improved people's living conditions. Vietnam has completed many of the UN Millennium Development Goals (MDGs) ahead of schedule and is making efforts to realize UN Sustainable Development Goals (SDGs). Recently, Vietnam has successfully controlled the Covid-19 pandemic and promoted economic recovery, becoming one of the countries with the highest GDP growth in Asia, he said. 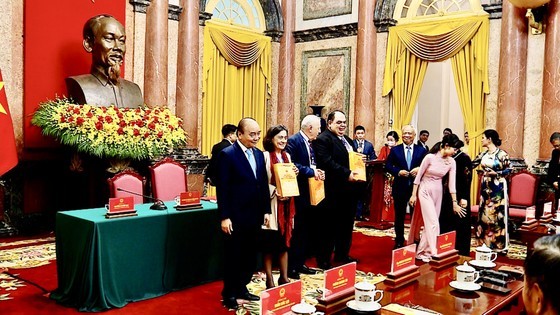 President Nguyen Xuan Phuc offers gifts to delegates to the 22nd Assembly of the World Peace Council. (Photo: SGGP)
Vietnam will be persistent with the goal of national independence in association with socialism, while pursuing the foreign policy of independence, self-reliance, peace, friendship, cooperation and development, diversification and multilateralization of external relations, and active international integration, ensuring the highest interests of the nation on the basis of basic principles of the United Nations Charter and international law, he stressed.
President Phuc said he hopes that the WPC, international democratic organizations and progressive forces in the world will continue to accompany, unite and support the Vietnamese people on their new path. Vietnam will continue to actively contribute to the movements of the council and progressive people around the world for peace, national independence, democracy and social progress, he pledged.
At the meeting, leaders of the WPC and the National Peace Councils of countries showed respect and love for President Ho Chi Minh and admiration to the tradition and achievements of the Vietnamese people - a symbol of world peace.
They congratulated Vietnam and highly valued the country's strong transformation in all aspects. Representatives of countries showed their interest to cooperate with Vietnam to maintain world peace, for a world of fairness and justice as the Vietnamese people love peace and Vietnam holds an important position in the hearts of those who love world peace.