They also spoke highly of achievements gained in relations between the two Parties and countries over the past time.

Lauding major achievements China has recorded in containing Covid-19, restoring growth and shaking off poverty despite difficulties due to the pandemic since early 2020, Phuc expressed his belief that the country will reap greater fruits in the next 100 years.

Vietnam has also gained successes in pandemic containment and economic recovery, President Phuc said, highlighting the organisation of the elections of the 15th National Assembly and all-level People’s Councils for the 2021-2026 tenure.

Despite various difficulties and challenges, Vietnamese people will carry forward their solidarity and internal strength to move forward, Phuc noted. In this process, Vietnam wishes to receive cooperation from countries worldwide, including China, he said. 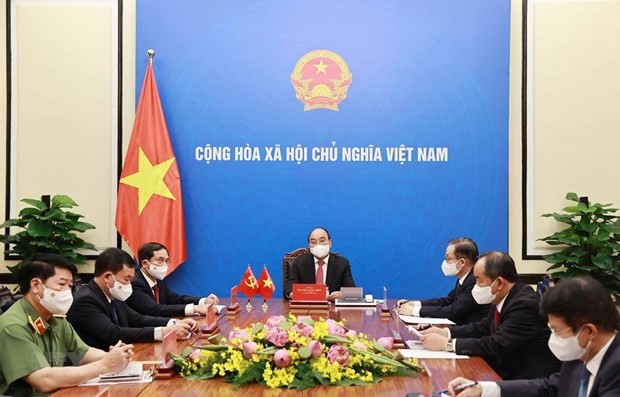 He reiterated Vietnamese Party’s and State’s consistent foreign policy of independence, self-reliance, multilateralisation and diversification, and attaching importance to developing the friendly neighbourliness and comprehensive strategic cooperative partnership with China.

In that spirit, he proposed several measures to boost the bilateral relations in the time ahead such as promoting mutual trust, and comprehensive, equal and mutually beneficial cooperation.

Vietnam and China should enhance collaboration in the Covid-19 fight, raise the quality and efficiency of economic, trade and investment cooperation, step up partnerships between localities and people to people exchanges, while working to maintain an environment of peace and stability, satisfactorily settle sea-related issues on the basis of common perceptions at the high level, in line with international law, the 1982 United Nations Convention on the Law of the Sea (1982 UNCLOS), and maintain their coordination at multilateral forums.

On this occasion, Phuc invited Xi and other Chinese leaders to visit Vietnam.

For his part, Xi said he believes that under the leadership of the Communist Party of Vietnam, the Vietnamese people will complete targets and tasks set at the 13th National Party Congress.

The Chinese Party, State and people attach great importance to the relations with Vietnam, and wish and stand ready to join hands with their Vietnamese counterparts to foster the bilateral friendship and cooperation, thus advancing the comprehensive strategic cooperative partnership, he said.

He also suggested ministries, agencies and localities of the two countries to work harder in order to facilitate the bilateral cooperation.

China backs Vietnam at multilateral cooperation mechanisms, and is willing to cooperate and support Vietnam in the Covid-19 fight, he affirmed.