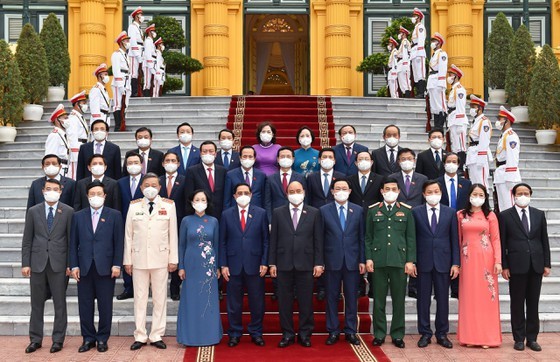 Members of the Government for the 2021-2026 term, and leaders of the Party, State, National Assembly (Photo: SGGP)
Attending the event were Prime Minister Pham Minh Chinh, National Assembly (NA) Chairman Vuong Dinh Hue, among others.
Speaking at the event, President Phuc affirmed that the development achievements of the country in general, the proud results of the Government in the past tenures in particular have been obtained partially thanks to the support and close coordination of agencies of the Party, State, NA, Vietnam Fatherland Front and people from all walks of life.
He stressed that only the spirit of solidarity and determination can lead to success, and only aspirations in thinking and actions can lead the country forward faster and more sustainably. 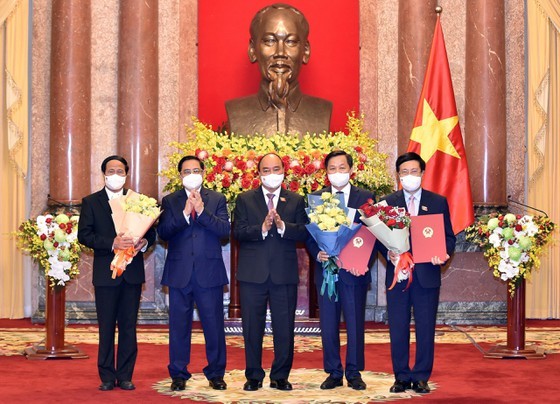 President Nguyen Xuan Phuc (C) hands over appointment decisions and Prime Minister Pham Minh Chinh (second from left) presents flowers to the Deputy Prime Ministers . (Photo: SGGP)
The President expressed his wish that all Government members for the 2021-2026 term will continue to promote their achievements and overcome shortcomings and weaknesses, and thoroughly grasp and strictly implement the Resolution of the 13th National Party Congress in their direction and administration work.
The Government and the Prime Minister should continue to effectively perform the tasks and power assigned in the Constitution and the law; build a united, dynamic, and decisive Cabinet; and build a governmental apparatus and a state administrative system that are unified, democratic, disciplinary, innovative, effective and truly of the people, by the people and for the people, stressed President Phuc. 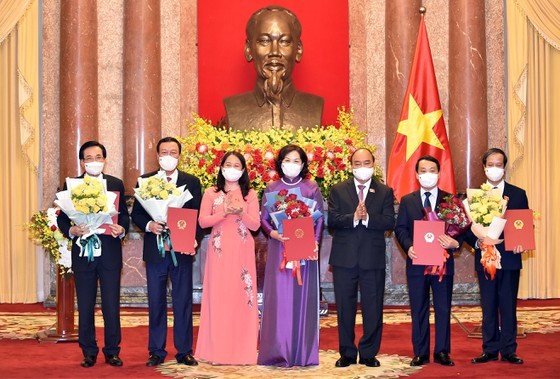 President Nguyen Xuan Phuc (3rd, R) and members of the Government for the 2021-2026 term
Prime Minister Pham Minh Chinh affirmed that the Government is willing to devote itself to serving the Fatherland and the people, respect the law, comply with the functions, tasks and power prescribed by the Constitution and law, and obey the leadership and direction of the Party Central Committee, the Politburo and the Secretariat as well as the Party General Secretary and senior leaders of the Party and State.
The Government will continue to inherit and promote the achievements of the Government over the past tenures, especially the 14th tenure which has made important contributions to the national building and safeguarding cause.
He said that the Government has identified two key tasks that are effective pandemic prevention and implementation of the country’s socio-economic development targets and tasks approved by the National Assembly and ensuring social security and safety for people and defence security and international integration.

Prime Minister Pham Minh Chinh affirms that the Government is willing to devote itself to serving the Fatherland and the people. (Photo: SGGP)
The fight against the Covid-19 pandemic is considered an important and urgent task at present, PM Chinh stated, adding that to prevent and drive back the pandemic, the Government will join the political system and the people nationwide to curb the spread of the coronavirus by strictly implementing pandemic prevention and control regulations, especially the vaccine strategy.

The PM asked Government members to uphold their sense of responsibility before the Party, nation and people, and fulfill their assigned tasks.