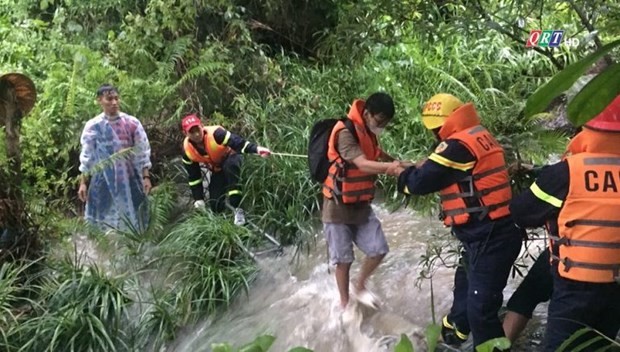 The fire-fighting section of the police of central Quang Nam is commended for their efforts to successfully rescue a group of teachers and students trapped on the bank of a stream in Que Son district. (Photo: qrt.vn)
In his letter, the President commended the team for their ingenuity, decisiveness, courage and rescue skills, affirming that this feat has contributed to highlighting the image of the People's Public Security officers who are always ready to serve the people, and do not mind difficulties and dangers in protecting people's lives and properties.
He urged each citizen to actively improve their initiative in natural disaster prevention and control, and calmly deal with unexpected incident.
The President also asked localities to step up communication activities and better the capacity for natural disaster prevention and control, incident response and search and rescue.
At 3:58 pm on August 6, after receiving the information that a group of 23 students and teachers got stranded in the bank of Tien Stream in Que Hiep commune, Que Son district, a 15-member fire-fighting and rescue team rush to the site.
By 17:30 on the same day, the force had taken students and teachers to safety.