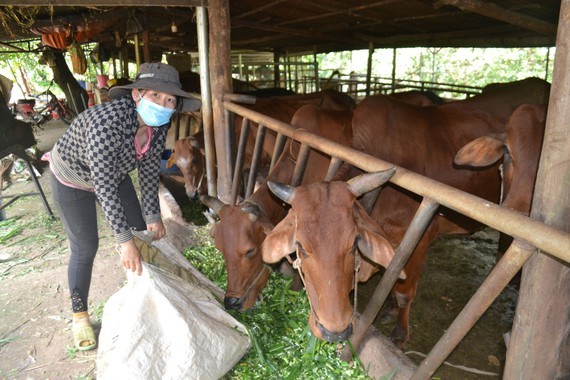 Good repair houses worth VND2.5 billion have replaced dilapidated shelters on the 10-hectare settlement area in Dak A village in Bu Gia Map District. Eeach house has an area of 500m2 with a living room, a bedroom, and a self-contained bathroom. Households have access to clean water from two wells and electricity from the national grid, and a solar power system to illuminate the main road.
Before moving to the resettlement area, resident Dieu Dak’s family had been a poor household in Bu Ren village; however, later, the life of the 43-year-old S'tieng ethnic man’s family has improved much when he moved to Dak A resettlement area.
In addition to a house and a land plot for cultivation, his family was also given two breeding cows. Furthermore, inhabitant Dieu Dak was also hired to work as a forest guard in the Bu Gia Map National Park with a monthly salary of VND10 million (US$439). He said that he and his family members had led a nomadic life; therefore, the family had a precarious financial position. When he decided to move to the area and he had a job with a stable high income, his family is not destitute any more.
Similarly, resident S'tieng ethnic Dieu Gac's family has a good house in the resettlement area to live in and has an income of more than VND10 million a month from harvesting rubber. His daughter, who is a fifth grader, was adopted by the 778th National Defense Economic Union, so the family has not had to pay tuition fees and studying items.
Vice Chairman of the People's Committee in Bu Gia Map Commune Dieu Thuan said that the disadvantaged commune with 7,197 residents, 73 percent of the population are ethnic minorities, mainly poor and near-poor households. Thanks to the assistance of relevant agencies, unions and the 778 National Defense Economic Union stationed in the Commune, inhabitants have good houses, production land, and stable jobs.
At the beginning of 2019, Binh Phuoc had 4,545 poor households who are ethnic minorities accounting for 52.76 percent of the total poor households in the province in remote and isolated areas with bad infrastructure and low education levels. Therefore, local inhabitants have fewer opportunities to approach new business methods resulting in difficult lives.
In the face of the situation, Binh Phuoc Province has implemented the annual program to reduce 1,000 poor ethnic minority households by giving support of housing, electricity, water, toilets, television, vocational training, loans so that people can decide what they do for their livelihoods.
Up to 95 percent of the population in Binh Trung village in Phuoc Tan commune are ethnic minorities. In 2020, 20 households in the village were successful in escaping poverty thanks to the program to reduce 1,000 poor ethnic minority households.
The family of Mr. Dieu Y, born in 1972, used to be a poor household without a stable job, so they were presented breeding cows, production tools, and a loan of VND 50 million from the Bank for Social Policies to plant cashew.
With their great efforts, the family was removed from the list of poverty households in 2020. Thousands of poor ethnic minority households are also accessing capital and they have been taught how to do production well. Fortunately, despite the prolonged Covid-19 epidemic, thanks to stable jobs and income from rubber gardens, no ethnic minority households have fallen into destitution again.
According to Binh Phuoc Department of Labor, Invalids and Social Affairs, while implementing the Program to reduce 1,000 poor ethnic minority households during 2019-2021, the province has allocated a budget and mobilized social contributions of more than VND260 billion to support ethnic minority households, reducing 2,742 poor ethnic minority households but the plan targets to reduce 2,000 households. The program aims to reduce 2,000-2,500 poor households annually.
Recently, the People's Committee of Binh Phuoc province has established a Steering Committee to check the number of poor, near-poor households and households with average living standards for the period 2022-2025. Based on that, the steering board will give advice to the provincial People's Committee which will issue a plan to submit to the Ministry of Labor, Invalids and Social Affairs.