Apart from that, the rate of poor households of Khmer ethnic minority decreased by more than 4.11 percent. 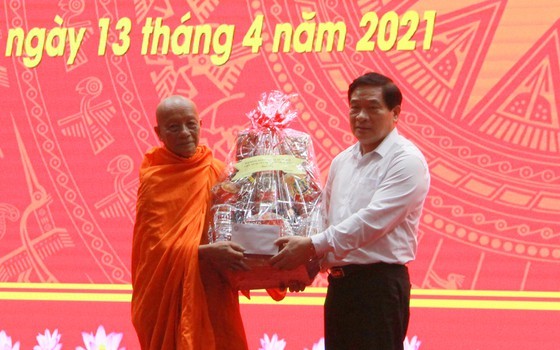 The figure was released at the meeting "Celebrating the Year of the Trophy Lunar New Year in 2021” yesterday held by the provincial Party Committee, the People's Council, the People's Committee, and the Vietnam Fatherland Front Committee of Soc Trang Province.
Ha Ngoc Chien, Chairman of the National Assembly’s Council of Ethnic Minorities together with leaders of the Provincial Party Committee, People's Council, People's Committee, Vietnam Fatherland Front Committee of Soc Trang province; dignitaries, monks, officers and soldiers were attending the meeting.
At the meeting, delegates listened to a brief report on the province's socio-economic development in 2020, as well as directions, goals, and key solutions in the coming time.
By 2020, Soc Trang province has a total population of nearly 1.2 million people, of which the Khmer people account for more than 30 percent.
On this occasion, Mr. Chien presented gifts to the province's Executive Board of Vietnam Buddhist Sangha and 10 outstanding dignitaries.
The Choul Chnam Thmey in 2021, the traditional celebration of the solar New Year of the Khmer ethnic people , will take place from April 14 to 16.