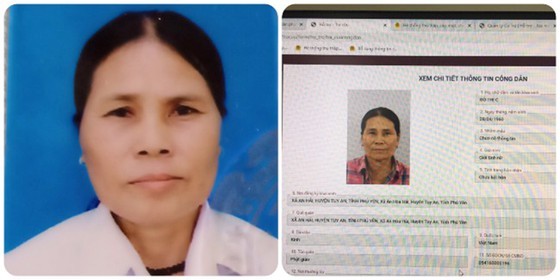 On May 19, Colonel Vo Van Thanh, Chief of Police of Hoai Nhon town said that the unit had just discovered and helped a woman in Hoai Chau Bac commune in Hoai Nhon town find her twin sister has been lost for 47 years.
According to Mr. Thanh, while handling the application for citizen identification cards, the unit discovered that Mrs. Do Thi Ben's face who is 62 years old in Hoai Chau Bac commune was identical to that of Mrs. Do Thi C, also 62 years old, in An Thach commune in Tuy An District in the Central Province of Phu Yen, 136 kilometers far from Binh Dinh Province. Colonel Thanh revealed that when processing the image of Ms. Ben, the computer could not load it because her face was similar to that of another citizen in Phu Yen Province.
After that, the police force had a talk with Ms. Ben who disclosed that when she was 11 years old, she lost her family and then was raised by a couple in Hoai Chau Bac until now. So far, Mrs. Ben only has remembered having a twin sister, but she doesn't know where her hometown is or where her family is.
After the confirmation from Ms. Ben, Hoai Nhon Town Police contacted the Tuy An District Police to find Ms. C., in order to clarify the information before processing the application for granting citizen identification cards to them.
After knowing the story, Ms. C burst into tears confirming that she had a twin sister, lost in 1975. When she received news from her family, Mrs. Ben was extremely touched because she did not think she could find a twin sister in such an unexpected situation.
Currently, police officers have been carrying out procedures to support these two cases to receive their relatives and complete the documents for issuing citizens' identification cards for them.