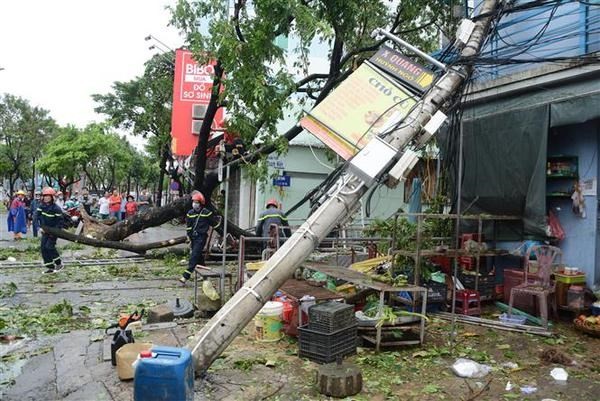 The storm also knocked down more than 500 trees in different localities (Photo: VNA)
The PM underlined the need to get students in affected localities to return to school as soon as possible, make sure that no one has to suffer from hunger, cold or has no place to live, and prevent diseases from breaking out after the storm.
The Government leader said that although Noru is a strong storm that landed at night, preparations against the storm were effective thanks to efforts of the administration at all levels and in the community.
The typhoon swept through central localities on September 27 night and early September 28, bringing strong winds and torrential rains.
According to the Ministry of Natural Resources and Environment, to date, there has been no report on human live loss. Four people were injured, three houses were destroyed and 157 others were damaged. Three small boats were sunken, while 9,427 power transformer stations were damaged, causing a power outage in 15 communes. The storm also knocked down more than 500 trees in different localities. 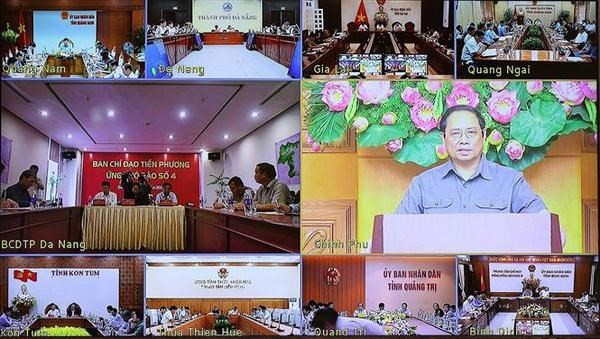 Prime Minister Pham Minh Chinh addresses the meeting (Photo: VNA)
The Vietnam Meteorological and Hydrological Administration said that on September 28, the storm moved west towards Laos and weakened into low pressure. From September 28 at noon, it no longer affected Vietnam.
However, due to the circulation of the storm, from September 28 to September 30, localities in central and Central Highlands regions from Thanh Hoa southwards are likely to suffer torrential rains.
High risks of flash floods and landslides are forecast in Quang Tri, Thua Thien-Hue, Quang Nam, Quang Tri and Kon Tum provinces.
At the meeting, PM Chinh asked the Ministry of Finance to provide aid in rice and cash to affected localities based on their demands to help locals settle down and resume production. 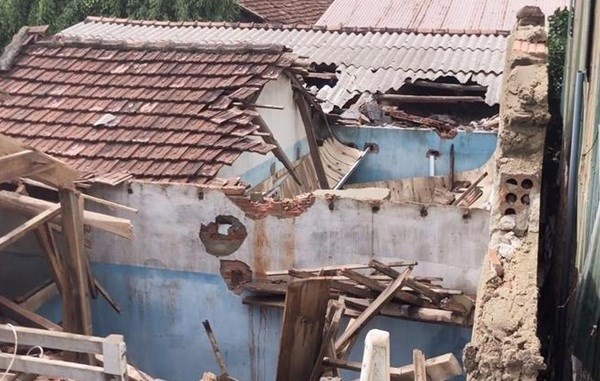 A house damaged by the storm (Photo: VNA)
Relevant ministries and agencies were instructed to ensure smooth traffic, power supply, and a clean environment.
At a meeting of the Frontline Steering Committee for response to Typhoon Noru the same day, Deputy Prime Minister Le Van Thanh, head of the committee said that good preparations ahead of the storm have produced good results, with no loss of human life and minimum material losses. He hailed localities for their strong performance in bracing for the storm.
Meanwhile, Director of the Civil Aviation Authority of Vietnam (CAAV) said that nine out of 10 airports that had been closed due to Typhoon Noru have been reopened. Airports in Chu Lai, Buon Ma Thuot, Lien Khuong and Vinh have been resumed from September 28 at noon, while Da Nang airport has been opened from 1:30 pm the same day. The remaining, except for Dong Hoi Airport, have been reopened after 2 pm the same day. Hundreds of flights to and from the central region had to be canceled due to the typhoon, affecting tens of thousands of passengers.