PM Nguyen Xuan Phuc congratulated Xiong Bo in his new working term as the Ambassador Extraordinary and Plenipotentiary of the People's Republic of China to Vietnam.

At the meeting, the Vietnamese leader highly appreciated positive results in the two countries’ cooperation ties during previous time.

PM Phuc desired the new ambassador would affirm an important role in the development of friendship and comprehensive cooperation between the two parties, nations in the upcoming time.

PM Nguyen Xuan Phuc reviewed his deep impression in the previous visit to Denmark as well as in Partnering for Green Growth and the Global Goals (P4G) summit in October, 2018 in the country.

On the occasion, he suggested the both sides to closely collaborate in implementing cooperation agreements after the visit. 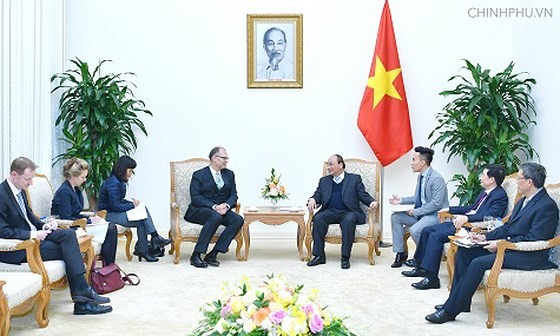 Mr. Kim Hojlund Christensen will make more efforts in increasing the bilateral trade turnover of the two countries in the upcoming time.