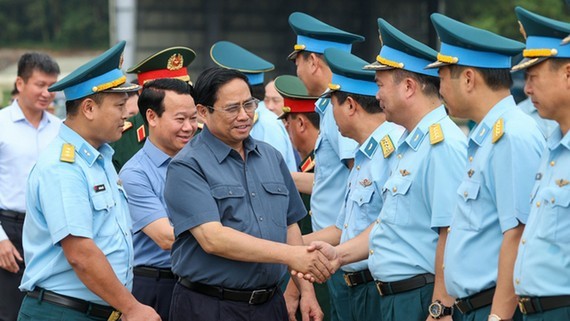 On behalf of the Party, State, the Prime Minister praised the efforts, feat of arms, and outstanding achievements of Air Force Division 371 in general and Air Force Regiment 921 in particular.
Earlier, Prime Minister Pham Minh Chinh and the working delegation had surveyed and listened to the report of the master plan for the construction of the Thac Ba Lake National Tourist Site in the Northern province of Yen Bai. Besides, the Prime Minister was also at the site to survey Yen Bai Airport.

Speaking at the working session, Prime Minister Pham Minh Chinh agreed with the investment policy to build facilities serving the training, task performance and combat readiness of the unit. Besides, the leader had assigned relevant units to study more and evaluate the proposal of Yen Bai Airport exploitation for both military and civilian purposes.