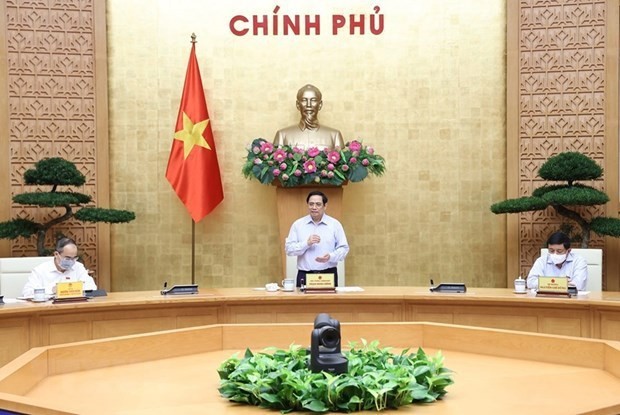 Prime Minister Pham Minh Chinh at a working session with leaders of ministries, vaccine producers and scientists in Hanoi on July 23 (Photo: VNA)
He gave the direction during a working session with leaders of ministries, vaccine producers and scientists in Hanoi on July 23 to discuss the research and production of Covid-19 vaccines.
Speaking at the event, Chinh stressed that Vietnam is rolling out “vaccine strategy”, including importing; studying, facilitating vaccine production technology transfer and producing home-grown vaccines; and vaccinating the whole population for free.
The Health Ministry reported that Nanocovax produced by the Nanogen Pharmaceutical Biotechnology JSC and Covivac by the Institute of Vaccines and Medical Biologicals are under clinical trials.
For Nanocovax, the first shots were given to 13,007 volunteers in the third phase while the second shots were offered to 977 others. The phase is scheduled to be completed by August 15.
So far, three domestic units and enterprises have negotiated with partners from the US, Japan and Russia about technology transfer.
If trials are successful, units plan to begin producing vaccines with an annual capacity of 200-300 million doses from late 2021.
Participants suggested tackling obstacles in mechanisms regarding the research, production and transfer of vaccine production technology, including soon submitting amendments to the Law on Pharmacy to serve the urgent licensing of Covid-19 vaccines.
Concluding the event, Chinh directed the Health Ministry to establish a working team in charge of partnering with World Health Organisation (WHO)’s experts to study, clinically test and assessing home-grown vaccines.