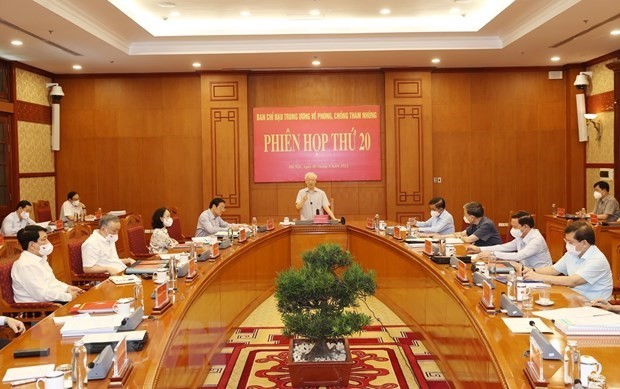 General Secretary of the Communist Party of Vietnam Nguyen Phu Trong addresses the meeting (Photo: VNA)
The meeting, the first since the CPV convened its 13th National Congress earlier this year, aimed at reviewing the fight against corruption in the first half of 2021, defining key tasks for the second half and making decisions on several important issues.
During the January-June period, Party Committees and Inspection Commissions at all levels imposed disciplinary measures against over 70 Party organisations and more than 8,000 Party members. The Party Central Committee’s Inspection Commission proposed the imposition of disciplinary measures against one Party organisation and seven officials managed by the Party Central Committee, and many officials and leaders of state-owned enterprises who committed violations.
The inspection and audit sectors discovered economic violations with a total sum of over VND54.47 trillion (US$2.37 billion ) and 1,760 hectares of land, while proposing financial settlements totalling VND23.5 trillion, and suggesting the withdrawal of over VND7 trillion and 644 hectares of land.
Attention was paid to investigation, prosecution and trial of economic corruption cases involving many high-ranking officials.
Relevant agencies seized, distrained assets, blocked accounts, and prevented asset transactions in economic corruption cases with a total amount of VND 14.41 trillion. Civil judgment enforcement agencies also recovered nearly VND2 trillion.
Regarding the key tasks for the last six months of 2021, the steering committee requested Party Committees, Party organisations and authorised agencies to focus on Covid-19 prevention and control, protection of public health, and fulfilment of the tasks set in the 2021 Work Programme.
It will speed up the progress of verification, investigation, prosecution and judgment of cases under its supervision; and strives to finish the investigation of two cases, issue indictments to prosecute six cases, conduct first-instance trials of nine cases and appeal trials of seven cases, and finish verification and settlement of five cases as planned by the end of 2021.
Party General Secretary Trong, who is also head of the steering committee, requested it to direct relevant agencies to make greater efforts, bring into full play the strength of the entire people and the entire political system.
The steering committee should do better, achieve higher quality, and pay more attention to self-inspection and self-settlement, he said.