The Party chief, accompanied by a high-ranking Vietnamese delegation, was welcomed by French Ambassador to Vietnam Bertrand Lortholary and Vietnamese Ambassador to France Nguyen Thiep along with representatives from the French Government and the overseas Vietnamese community in France.

Upon his arrival in Paris, Party General Secretary Nguyen Phu Trong and the high-ranking Vietnamese delegation visited Montreuil city, the second biggest city of the Seine-Saint-Denis department, about 15km to the northeast of Paris.
Montreuil is the headquarters of many large industrial corporations. In 1999, the city established friendly and cooperative relations with Vietnam’s northern province of Hai Duong. The two sides set up a centre to promote collaboration in education, health care, environment, urban planning, economics and tourism.
Party leader Nguyen Phu Trong and leaders from Montreuil city laid wreaths at the statue of late President Ho Chi Minh to commemorate the national hero and the world cultural celebrity.
Mayor of Montreuil city Patrice Bessas said President Ho Chi Minh is the great leader of Vietnamese people and peace lovers around the world, including Montreuil residents.
The two sides have increased exchanges over the past few years and pledged to diversify cooperation in numerous fields such as climate change adaptation, agriculture, and sustainable use of natural resources.
Montreuil is one of the first cities in the world to support Vietnamese people in the resistance wars against French colonialism and American imperialism, the Mayor said.
Party leader Nguyen Phu Trong said he was glad to meet French friends in Montreuil in a very warm atmosphere.
He noted that Vietnam and France are celebrating the 45th founding anniversary of diplomatic ties this year. Montreuil is the symbol of the long-standing bilateral friendship, he said.
On behalf of Vietnamese people, the Party chief thanked French people for promoting solidarity and supporting Vietnam in the past and at present.
He added that his ongoing visit to France aims to strengthen bilateral cooperation in various fields, including people-to-people exchanges and coordination between localities.
Party leader Nguyen Phu Trong and Mayor Patrice Bessas jointly planted a commemorative tree at the Montreuil park. They later visited a space displaying objects and documents on President Ho Chi Minh’s revolutionary life in France at the Montreuil Museum of History.
During his stay in France, Party General Secretary Nguyen Phu Trong will hold talks and meet with French leaders, representatives from the Movement of the Enterprises of France (MEDEF) – the largest employer federation in France as well as young intellectuals and Vietnamese expatriates.
Particularly, the Party leader is expected to witness the signing of a series of importation cooperation agreements between Vietnam and France.
The visit, which is taking place on the occasion of celebrating the 45th founding anniversary of Vietnam-France diplomatic ties and fifth anniversary of the bilateral strategic partnership, has significant meaning to promote and deepen their friendship and cooperation across the fields.
It will also be an occasion to popularise Vietnam as a country with many reform achievements, a trustworthy partner ready to bolster ties with France, an emerging market with numerous investment and business opportunities for French businesses and an attractive, safe and friendly destination for French tourists.
Vietnam and France set up diplomatic ties on April 12, 1973. Overcoming ups and downs in history, over the past 45 years, especially since the establishment of the strategic partnership in 2013, Vietnam-France relations have developed well.
France is an important European partner of Vietnam. It also respects Vietnam’s stature and contributions to peace, stability and development in the region and the world. Vietnam’s membership of the ASEAN Economic Community and many free trade agreements, including the Comprehensive and Progressive Agreement for Trans-Pacific Partnership (CPTPP) and the EU-Vietnam Free Trade Agreement (EVFTA), expected to take effect in the near future, will bring new cooperation chances for both countries. 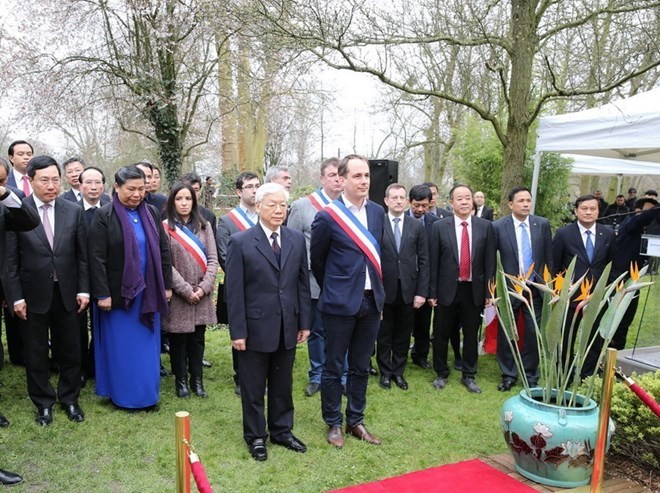 General Secretary of the Communist Party of Vietnam (CPV) Nguyen Phu Trong and leaders from Montreuil city laid wreaths at the statue of late President Ho Chi Minh to commemorate the national hero and the world cultural celebrity (Photo: VNA) 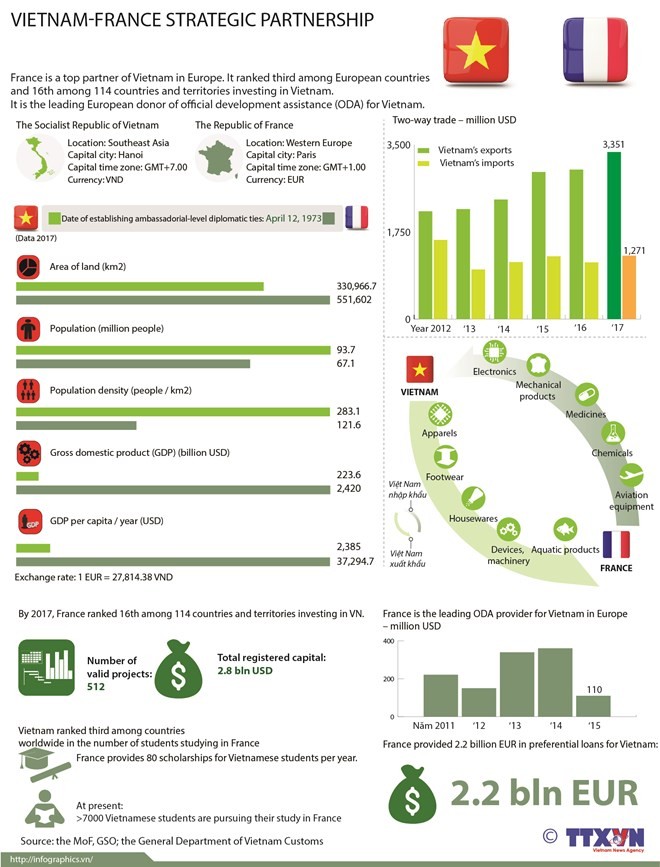