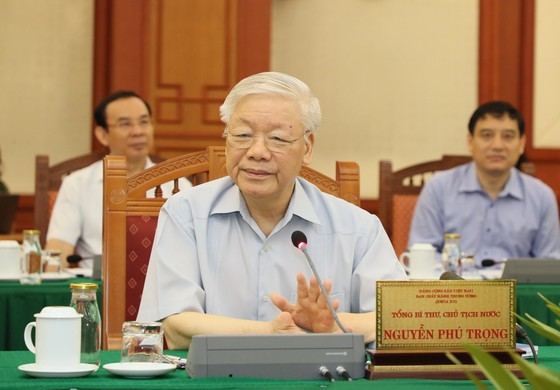 Party General Secretary and State President Nguyen Phu Trong speaks at the meeting. (Photo: SGGP)
Speaking at a working session between the Politburo and the Standing Board of the city Party Committee in Hanoi, the top Party leader asked the committee to continue acquiring opinions of the public and scientists in order to complete draft documents to the congress.

He underlined the special position and importance of HCMC, which is a special municipality and a major centre of economy, culture, education-training and science-technology, a hub of international exchange and integration, and an economic locomotive of the Southern key economic zone and the nation at large.
The five-year Party congress is an important political and historical event as it opens up a new vision for a new development period, he stressed. Therefore, it must be prepared thoroughly.
The leader suggested the documents focus more on the Party building work, apart from economic issues.
At the meeting, the Politburo basically supported the targets, orientations, tasks and solutions mapped out by the city for the 2020-2025 period, with a vision towards 2030.
However, Politburo members said the city should devise a long-term vision on its position in Southeast Asia, and pay more attention to removing bottlenecks hindering its socio-economic development like those regarding transport infrastructure, high-quality human resources, administrative procedures, investment environment, and regional cooperation and connectivity.
HCMC needs to optimise all opportunities, potential and strength to overcome challenges and difficulties, thus becoming a national economic driver, towards a big centre of economy, finance, trade and science-technology in Southeast Asia, the Politburo said. 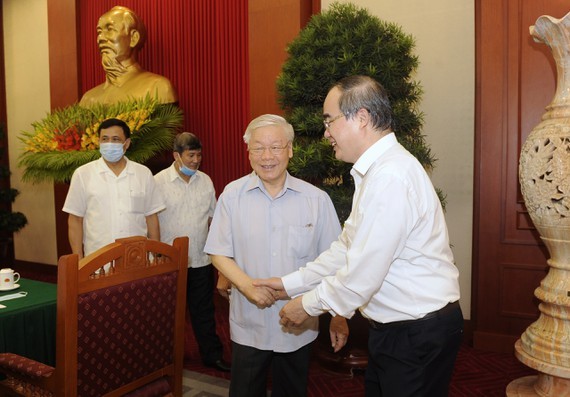 Politburo Member and Secretary of HCMC Party Committee Nguyen Thien Nhan Nguyen Thien Nhan (R) shakes hands with Party General Secretary and State President Nguyen Phu Trong at the meeting. (Photo: SGGP)
The Standing Board reported that HCMC’s average growth rate stood at 7.6 percent over the past five years, and it contributed 22.7 percent of the national gross domestic product (GDP).
Sectors with high value and using science-technology make up an increasing proportion in the local economic structure. Meanwhile, the city’s investment environment has been improved significantly. HCMC has also taken the lead nationwide in productivity.
Its per capita gross regional domestic product (GRDP) reached US$6,600, 2.4 times higher than the national average, with improvements made in social welfare, job generation and poverty reduction.
SGGP photos of the meeting: 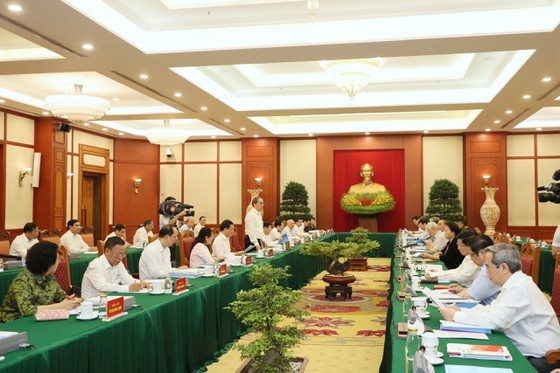 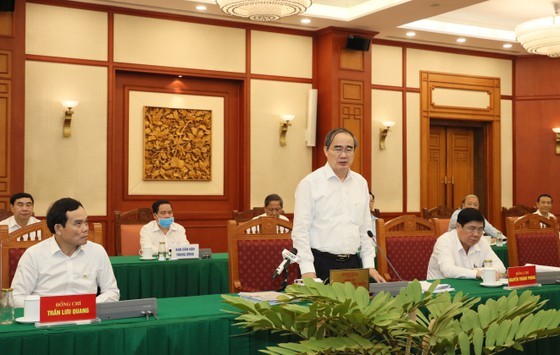