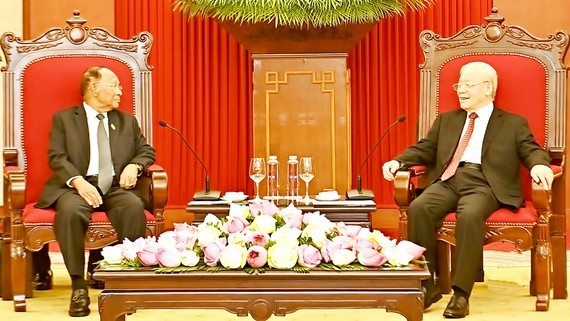 Party General Secretary Nguyen Phu Trong (R) and President of the Cambodian National Assembly Samdech Heng Samrin (Photo: SGGP)
The Party leader thanked Cambodia for the valuable support that the country has given to Vietnam, and highlighted the traditional relations of Vietnam and Cambodia as two close neighbors and brothers who have stood side by side in the cause of national liberation and reunification in the past as well as in national construction and development today.
Trong also underscored the importance of the relationship between Vietnam, Laos and Cambodia. He wished that the three countries work together to preserve and foster the development of their relationship for the prosperity of each country, and for peace, stability, cooperation and development in the region and the world.
Heng Samrin, for his part, said that Cambodia will work with Vietnam to preserve and develop the relationship between the two countries to new heights and pass it down to future generations.
He informed the host about the recent situation in Cambodia, especially the successful organization of the local election for fifth tenure, and the CPP's great victory in the election.
The Cambodian NA President also briefed General Secretary Trong on the results of the talks between him and Vietnamese National Assembly Chairman Vuong Dinh Hue within the framework of the visit.