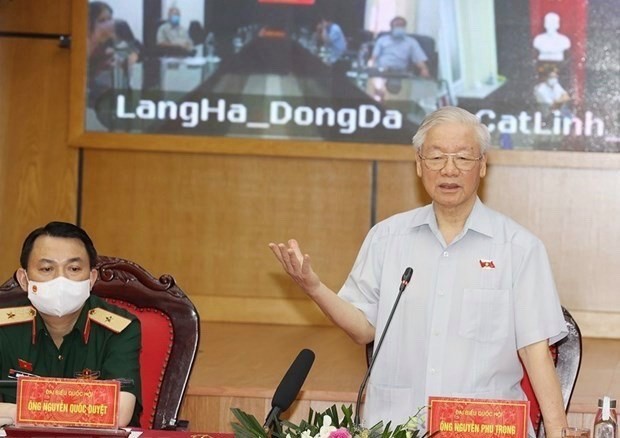 Party General Secretary Nguyen Phu Trong at the event (Photo: VNA)
At the event, voters voiced their opinions about the fight against the pandemic, social welfare for residents, measures to remove difficulties faced by enterprises, and revising policies for socio-economic development.
In response, the Party leader said the country’s important activities were still held despite the Covid-19 pandemic. The entire people upheld the tradition of patriotism, solidarity and mutual support.
As the pandemic remains complicated, he stressed the need for staying vigilant and focusing on economic development, maintaining political security, social safety and order.
He urged voters and people to continue grasping the situation and offering timely suggestions to the Party and State, thus helping officials fulfill their assigned tasks.
The leader informed that the upcoming nationwide conference disseminating the Resolution adopted by the fourth plenum of the 13th Party Central Committee will focus on socio-economic development, building and rectification of the Party and the entire political system, and the fight against corruption and negative phenomena.
In the end, he also affirmed his absolute trust on the leaders and people of Hanoi. With their heroic tradition, he believed that the capital city will become an example for other localities across the country to follow.