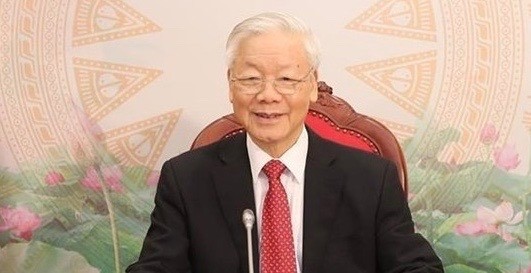 General Secretary of the Communist Party of Vietnam (CPV) Central Committee Nguyen Phu Trong. (Photo: VNA)
The phone talks took place on the occasion of the 71st founding anniversary of the CPP (June 28) and the 55th anniversary of the establishment of Vietnam-Cambodia diplomatic ties, and right after the success of the elections of the fifth-tenure commune and ward councils in Cambodia.
Trong congratulated the CPP on leading the Cambodian people to gain great and important achievements in all fields over the past 71 years.
He expressed his belief that under the reign of King Norodom Sihamoni, the leadership of the Senate, National Assembly and Government of Cambodia with the core role of the CPP led by its President and Prime Minister Hun Sen, the Cambodian people will reap more fruits in the process of national building, safeguarding and development.
Hun Sen thanked Vietnam for coordinating with and supporting Cambodia in successfully organizing a ceremony to mark 45 years of his journey to overthrow the Pol Pot genocidal regime.
Showing his delight at the great and comprehensive achievements gained by the Vietnamese people under the leadership of the CPV headed by General Secretary Trong, he said, expressing his belief that Vietnam would obtain new and greater results, and successfully realize the 13th National Party Congress’s Resolution.
The two leaders informed each other on the situation of each Party and each country.
They stressed the significance and importance of solidarity and mutual support between the two Parties, States and people of Vietnam and Cambodia, affirming to work together to maintain and nurture the bilateral ties.
The two leaders also appreciated the significance of the Vietnam - Cambodia Friendship Year 2022, especially when the two sides recently coordinated in celebrating the 55th founding anniversary of diplomatic relations and 45 years of PM Hun Sen's journey to overthrow the Pol Pot genocidal regime.
Trong took the occasion to invite Hun Sen and other Cambodian leaders to visit Vietnam. Hun Sen also invited Trong and other Vietnamese leaders to visit his country at an appropriate time.