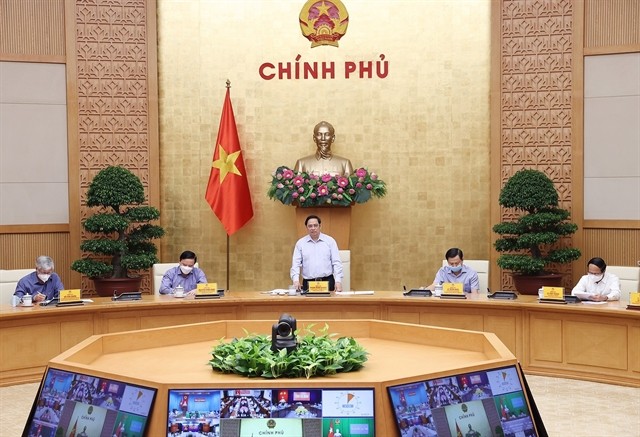 Prime Minister Pham Minh Chinh addresses the teleconference on August 29 (Photo: VNA)
The PM, who is also Chairman of the National Steering Committee for Covid-19 Prevention and Control, presided over the meeting with 20 provinces and cities, 209 districts and towns, and 1,060 communal-level localities nationwide which are currently implementing social distancing measures.

It was reported at the event that in the fourth wave of infections since April 27, the country has recorded 419,617 cases, of which 208,176 patients, or 50 percent, have recovered while 10,370 others have succumbed to the disease. Eight of the 62 provinces hit by the fourth wave have gone through 14 straight days without new cases while only Cao Bang province has stayed free of infections.
Since July 19, 343,686 new cases have been found in 23 localities imposing social distancing under the PM’s Directive 16/CT-TTg. The daily number of community infections is now on the rise as mass testing is being ramped up.
The pandemic situation remains complex in Ho Chi Minh City and nearby Binh Duong province. The numbers of community infections in Long An and Tien Giang are still high but there have been signs of declining. Meanwhile, outbreaks have gradually been brought under control in other southern provinces.
The pandemic in Hanoi, Da Nang, Khanh Hoa, and Phu Yen are basically still under control thanks to the application of drastic measures, including early social distancing. However, new hotbeds may still occur, according to the report.
PM Chinh said as the Covid-19 pandemic remains complicated and unpredictable in the world and the region, it is necessary to get prepared for living with and adapting to the pandemic, while continuing with drastic measures to bring the pandemic under control so as to shift focus on political and socio-economic development tasks.
Repeating the request for putting people’s health and lives first and above all, he stressed: “Having sacrificed economic activities to conduct social distancing, we must achieve the goal of containing the pandemic as early as possible.”
He said social distancing must be carried out seriously and strictly to make use of this period to rapidly conduct testing and vaccination in a scientific, effective, and comprehensive manner.
The Government leader told all-level authorities to ensure social security, especially for disadvantaged families, the homeless and vulnerable groups, during the social distancing period as well as people’s access to grassroots healthcare for the early detection and treatent of patients.
“The best vaccine is the vaccine administered earliest,” PM Chinh affirmed, noting that the Government, sectors, and localities have been working actively to implement the vaccine diplomacy so as to obtain vaccines as early and many as possible.
Domestic vaccine production is also showing a positive prospect, he added.
The PM also asked localities to consider reducing the population density in highly populous areas, assist businesses to keep production chains uninterrupted, and step up the application of sci-tech advances to the Covid-19 fight.
He affirmed that anti-pandemic measures are being implemented in the right direction, calling on localities to mobilise the combined strength of the entire political system, people, and businesses for the battle against Covid-19.