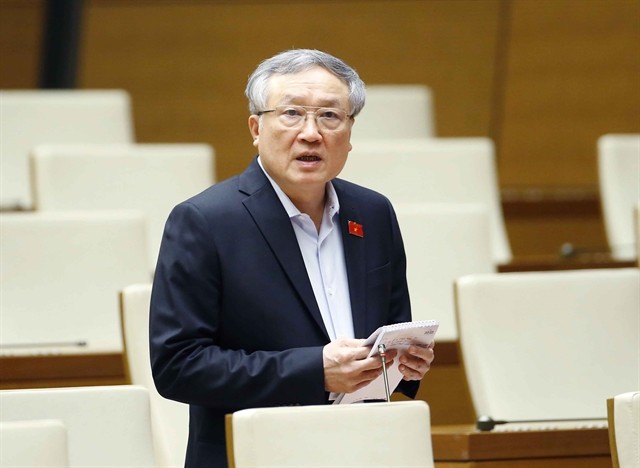 During a session discussing a resolution on organising online court hearings, they said the virtual format would create a driving force to solve cases more quickly, save time and travel expenses.
Deputy La Thanh Tan from northern Hai Phong City said online court hearings was a new form of proceedings conducted on digital platforms. It is necessary to invest in equipment and take cautious steps when applying it. Trial online sessions should be held first.

Deputy Nguyen Thi Yen from Ba Ria-Vung Tau Province agreed that online court hearings were new and need to be piloted for three years. After that, the Supreme People’s Court needs to report to the NA for further improvements.

Deputy Le Tat Hieu from Vinh Phuc Province said complicated cases or cases in which offenders did not admit to their crimes or involved many accomplices need to be held in person.

Online trials should only be for first-instance and appeal trials of civil and administrative cases, he said.

He said current laws did not mention in detail online court hearings, so the organisation must be carefully prepared. Agencies need to be trained before holding the online sessions.

The Supreme People's Court will listen to all of the feedback and submit annual reports to the NA.

He said the world had prepared the legal infrastructure for online trials in many different ways including adopting a separate law on online proceedings. Vietnam has issued an inter-sectoral circular between the Ministry of Public Security, the Supreme People's Procuracy and the Supreme People's Court to make preparations for the launch of online court hearings.

The Supreme People's Court will continue to finalise the circular and the NA deputies can give feedback, he said.

He also further explained the online court definition. Accordingly, an online court involves three factors - information technology, humans using such technology and legal infrastructure for the use of IT at the courts.

Speaking to Vietnam News Agency on the sidelines of the NA meeting on Sunday, Nguyen Thi Thu Ha, deputy head of Quang Ninh Province’s NA delegation, said online court hearings would create conditions for witnesses and lawyers who are far away to connect with the court.