According to initial information, at noon on January 8, the passenger bus of driver Truong Anh Minh was travelling on Hai Van mountain pass which is the most beautiful one in Vietnam before it plunged into the abyss.

Head of traffic police station Nguyen Hoang Vu said that rescue forces rushed victims of the accident to a nearby hospital for emergency treatment.
Presently, the rescue work is still underway as the bus is in the abyss.
Commissar of Lang Co border guard station Hoang Van Dung who took part in the rescue work said that the bus was carrying 26 people including one teacher and 22 students of a college in the Mekong delta province of Kien Giang.
According to witnesses, the bus driver lost control of the vehicle when passing Hai Van mountain pass and crashed into the cliff before plunging off the road into the 20-meter-deep abyss.
Police officers, soldiers, local residents and rescue workers had joined the rescue effort to take victims to the hospitals in the central city of Da Nang.
Till 3pm on the day, eleven victims of the accident were rushed to Da Nang General Hospital for emergency treatment; however, student Vu Thi Thao died on the way to the hospital and doctors had to cut off the left hand of another student. 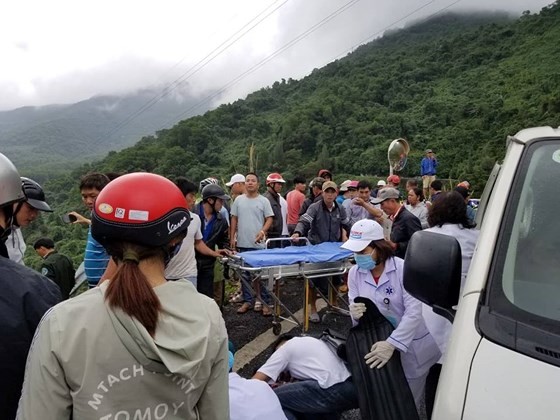 Rescue work is under way (Photo: SGGP)
Three victims had to undergo surgeries and one was treated in the Burn Ward of the hospital. Hundreds of medical workers were run off their feet to provide best treatment to victims.
The People’s Committee of Da Nang City decided to give VND5 million ($215.4) for dead student’s relatives and VND3 million for the injured while the People’s Committee of Thua Thien – Hue gave VND2 million to victims each at first.
Chairman of Thua Thien – Hue People’s Committee Phan Ngoc Tho and Deputy Chairman of the People’s Committee of Da Nang Dang Viet Dung also visited the victims in the hospital. Mr. Tho said that after receiving the news of accident, he arrived at the scene immediately, directing rescue workers to provide best help to the victims.
Kien Giang College Principal teacher Nguyen Minh Quan said that as per the training program plan, 55 students of tourism service management and two lecturers would come to the central provinces of Binh Thuan, Nha Trang, Phu Yen, Quang Ngai, Binh Dinh, Quang Nam, Da Nang, Thua Thien – Hue, Quang Tri, Quang Binh and Phan Thiet.
He led a group of teachers and victims’ families to fly to the spot soon in hearing the bad news.

Victims are rushed to nearby hospital for emergency treatment (Photo: SGGP)