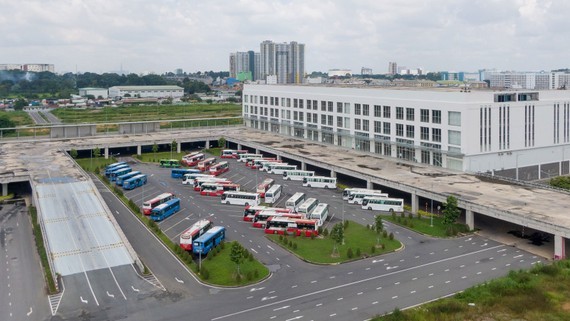 It is necessary to implement radical solutions in order to more effectively exploit the new East Coach Station. (Photo: SGGP)

Since the grand opening on October 10, 2020, the new East Coach Station has welcomed a humble number of customers each day, opposite to the expectation for such a leading national-scale coach station.

The staff in this station shared that since coming into operation, even at the busiest time, this station has fewer than 1,000 passengers a day. The situation became worse after the fourth outbreak of the Covid-19 pandemic. As a result, the quantity of passenger transport vehicles parking here is continuously dropping. Many transport businesses requested to move here for operation complained that there has been an unstoppable decrease of 70-80 percent in both their trips and customers.

Deputy Director of the HCMC Transport Department Vo Khanh Hung said that in the first stage, only 24 routes of passenger transport to and fro Quang Tri Province northwards that pass National Way No.1 are moved from the old East Coach Station (on Dinh Bo Linh Street of Binh Thanh District) to the new one (on Hoang Huu Nam Street of Thu Duc City). This means a predictable fewer quantity of passengers.

As planned, in the second stage at the beginning of this October, another 80 routes will be transferred to the new East Coach Station. These are the routes to and fro the North and Central regions, but not those to and fro the Central Highlands, which will be saved for the third stage.

Experts in the transportation field commented that regardless of which stage, functional agencies must implement practical measures to attract more passengers to the new station. One such feasible solution is to increase the volume of public transport from the inner city to this station. This will, to a large extent, eliminate the fear of having to travel a longer distance (nearly 20km) to the new East Coach Station, leading to passengers stopping the decision of catching an unlicensed coach right in the inner city.

Head Do Ngoc Hai of the Road Transport Management Division under the HCMC Transport Department informed that his department has already increased transit bus routes from the inner city to the new East Coach Station.

The Public Transport Management Center is going to build a bus station right in front of this new East Coach Station for passengers using 4 transit routes passing the gate of this station.

Another practical solution proposed by experts is to completely stop the operation of unlicensed coaches and illegal coach stations in HCMC in order to eliminate unhealthy competitions among transport businesses.

Adopting this solution, the HCMC Transport Department has asked the localities still facing this problem to cooperate with traffic inspectors to regularly patrol their areas and timely handle any law violations because the latter is not authorized to check inside fuel stations.

It is also planning to establish parking lots and transit stations at the entrances to the inner city for inter-provincial coaches. This will be the prerequisite to implement the policy of banning inter-provincial passenger coaches going through the heart of the city or picking up people there. Those serving customers with legitimate traveling demands like wedding or funeral will be permitted accordingly, while those taking tourists to the city will be marked with a ‘tourism vehicle’ sign, monitored by the HCMC Transport Department.

The municipal authorities are asked to increase the sanctions for the operation of illegal coach stations and passenger picking-up activities of unlicensed coaches.

The coach stations themselves should also increase their service quality and collect more reasonable service fees so that transport businesses are more willing to come back to these official stations.