It centered at 21.9 degrees north latitude, 112.5 degrees east longitude. The strongest wind near the center of the typhoon was at 140km per hour.

In the next 24 hours, typhoon Mangkhut will move west west north, at 25- 30km per hour and heading to the south part of China’s Guangdong, Guangxi then is expected to weaken into a tropical low-pressure system.

The National Center for Hydro Meteorological Forecasting said at 16pm on September 17, tropical low-pressure system will be at 23.4 degrees north latitude, 106.8 degrees east longitude on the south part of China’s Guangxi. The strongest wind near the center of the system will be at 40 to 50km per hour. 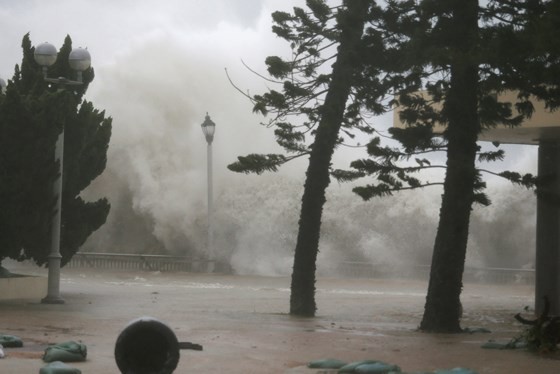 Due to the impact of typhoon, the sea areas of north parts of the East Sea tonight see heavy rains, rough seas.

Tonight, the sea areas of the Gulf of Tokin will see heavy rains, high waves at 3 to 4m, rough seas.

The provinces from Quang Ninh, Cao Bang, Lang Son will see strong winds at level 6, the northern and north central provinces will suffer strong winds with level risk at 3.

In the next 24 to 48 hours, tropical low-pressure system will move west west north at 25km then weaken into low-pressure zone.