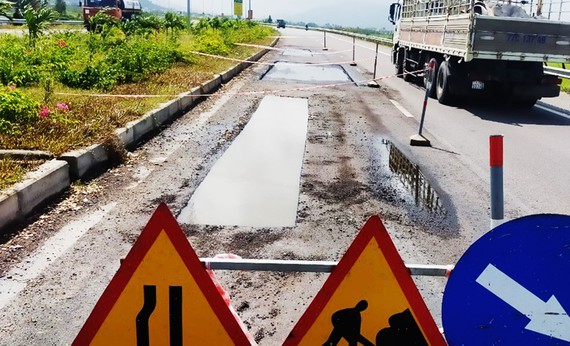 Sharing with SGGP Newspaper, Vice Director of the Transport Project Management Board of Binh Dinh Province Mr. Luu Nhat Phong said that the above damaged locations are confirmed in the construction bidding package of Phuc Loc Group and Yen Tung Company. The main reason has not been identified yet; however, it is possible that the road surface is corroded by acid when the torrential rains fall in addition to vehicle overloading.

The upgrading and expansion project of National Highway 19 has been built and opened to traffic for nearly a year. Currently, relevant units are completing procedures to submit the project to the Ministry of Transport for evaluation and hand-over before the highway officially comes into operation in the second quarter of 2021 as scheduled.

Amid the incident, the Transport Project Management Board asked the contractors to seek many solutions to absolutely repair the damage. Afterwards reports will be sent to the Ministry of Transport for appraisal, added Mr. Phong.

The National Highway 19 project had a total investment capital of more than VND4,410 billion (US$191 million).

The Transport Project Management Board of Binh Dinh Province is the main investor of the upgrading and expansion project of National Highway 19.