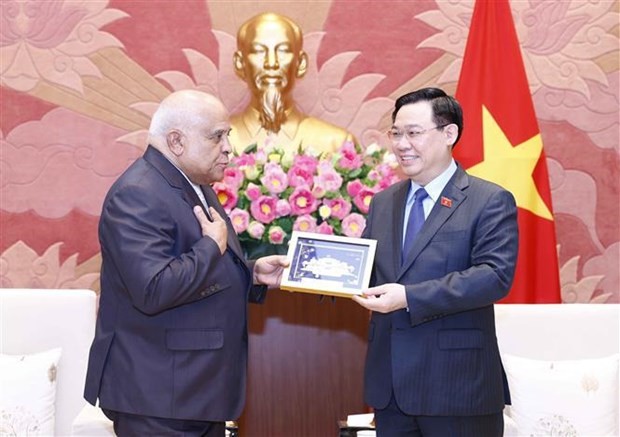 National Assembly Chairman Vuong Dinh Hue (R) welcomes  Cuban Ambassador Orlando Nicolas Hernandez Guillen (Photo: VNA)
The top legislator welcomed the two new ambassadors and expressed his belief that the diplomats, with their warm sentiments for Vietnam and their rich diplomatic experience, will help further promote the relationship between their respective countries and Vietnam.
He affirmed to the Cuban Ambassador, Orlando Nicolas Hernandez Guillen, that Vietnam attaches special importance to the special traditional relationship with Cuba. He stressed that the two countries should continue to bolster result-oriented cooperation in economy, trade and investment, and step by step elevate the cooperative ties to match their close political relationship.
NA Chairman Hue pledged that the Vietnamese legislative body will continue to promote the traditional friendship and special cooperation between the two countries as well as the collaboration between the two parliaments. 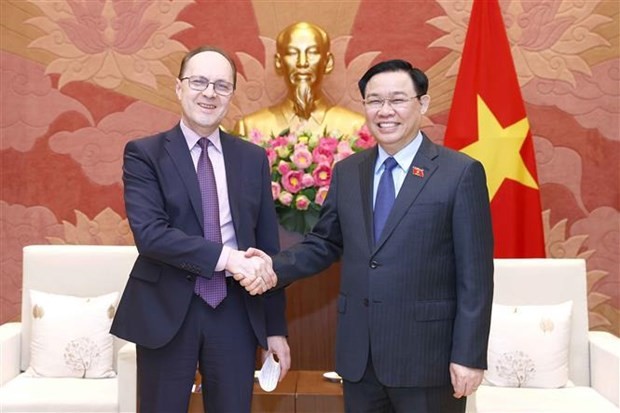 National Assembly Chairman Vuong Dinh Hue welcomes Russian Ambassador Gennady Bezdetko (Photo: VNA)
At the reception for Russian Ambassador Gennady Bezdetko, the NA Chairman emphasized that the Vietnamese people always bear in mind and treasure the precious support that the former Soviet Union and Russia now has given to Vietnam’s struggle for national liberation and reunification in the past and national construction and defense at present.

He affirmed that Vietnam wants to further strengthen cooperation with Russia in all fields for peace, stability, cooperation and development in the region and the world.
Both the NA Chairman and the Russian ambassador pledged to do their best to promote close coordination between the two countries’ parliaments, thus contributing to the Vietnam-Russia comprehensive strategic partnership.