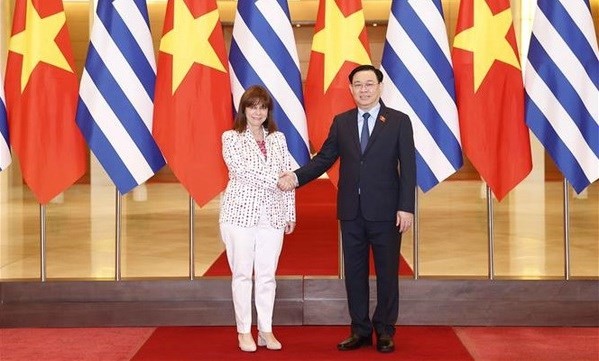 Hue noted that economic cooperation and trade between Vietnam and Greece have seen positive progress, especially since the EU-Vietnam Free Trade Agreement (EVFTA) took effect.
He proposed that the two countries continue to promote collaboration in areas of Greece’s strength and Vietnam’s demand such as maritime economy, shipbuilding, seaport, and tourism, while working together to reach a double taxation avoidance agreement and another on maritime transportation to create favourable conditions for economic exchange and trade.

The NA leader thanked the Greek parliament for ratifying the EVFTA, suggesting that it hasten the act on the EU-Vietnam Investment Protection Agreement (EVIPA) as well as the removal of the “yellow card” on Vietnamese fisheries sector.

The two sides should work closely together to optimise advantages from the two deals, protecting the legitimate interest of businesses of both countries during their investment and business activities in each other’s market, he said.

Hue proposed that President Sakellaropoulou and the Greek Government continue to create favourable conditions for the Vietnamese community in the country to settle down. He proposed that the two sides speed up the formation of twinning relations among localities, and finalise procedures for the establishment of such relations between Sparta city-state of Greece and Hue city of Vietnam, contributing to promoting people-to-people exchange.

For her part, President Sakellaropoulou pointed to potential for bilateral cooperation in history and culture.

The Greek President said her, with rich experience in protecting heritage against climate change impacts, education and tourism, can cooperate with Vietnam in the field.

NA Chairman Hue expressed his hope that the Greek President supports the promotion of parliamentary cooperation between the two countries in both bilateral framework and at multilateral parliament forums.

He thanked Greece and said he hopes that the country will continue to support the stance of ASEAN and Vietnam in the East Sea issue on the basis of respect to international law, as well as ASEAN-led mechanisms.

The Vietnamese NA leader took the occasion to, through President Sakellaropoulou, invite Speaker of the Hellenic Parliament Konstantinos Tasoulas to visit Vietnam at a convenient time.