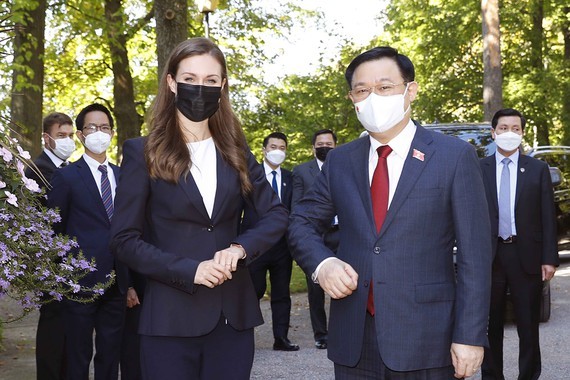 Finnish Prime Minister Sanna Marin (L) greets National Assembly Chairman Vuong Dinh Hue (Photo:SGGP)
The Finnish PM welcomed the Vietnamese top legislator to Finland in the first foreign trip by Hue since he took the helm of the Vietnamese NA, saying that it is a good manifestation of the traditional friendship between the two countries for decades.
She affirmed that Vietnam is among important partners of Finland in ASEAN and the Asia-Pacific region. The two countries have gained success in economic, educational, development and environmental cooperation, she said, adding that there are other potential fields that Finland wants to partner up with Vietnam in the time ahead.
NA Chairman Hue highlighted that his visit is the first by a Vietnamese NA head to Finland after 28 years. He agreed with the host that there is great potential for bilateral cooperation, and made clear that Vietnam hopes to promote intensive cooperation with Finland in startup ecology building, sustainable development, high technology, telecom, renewable energy, waste water treatment and transport, as well as in digital transformation, green economy and circular economy. 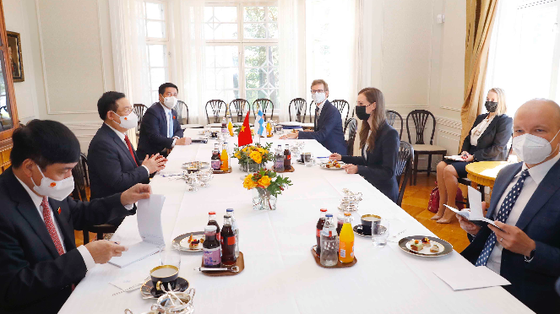 The meeting between NA Chairman Vuong Dinh Hue and PM Sanna Marin (Photo: SGGP)
According to Hue, bilateral economic ties, especially Finland’s investment in Vietnam, remain modest below the potential and the two countries’ strength. Finland’s valid investment in Vietnam at present stands at only US$23.63 million.
He asked the Finnish PM to advocate stronger cooperation between the business communities of the two countries in the context that the Vietnam-EU Free Trade Agreement has taken effect.
The Vietnamese top legislator also called for help from the Finnish parliament for Vietnam in accessing vaccine supplies, or transferring redundant vaccine and medical supplies to Vietnam so that the Southeast Asian country can cope with the resurgence of COVID-19. 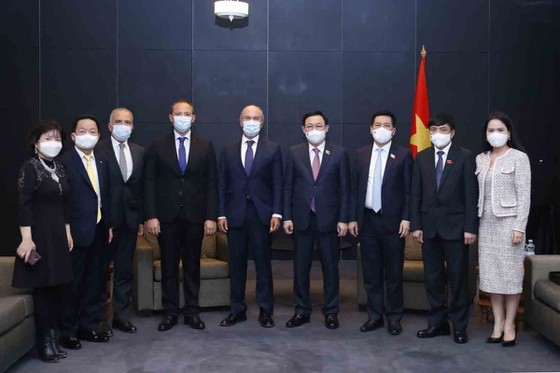 National Assembly Chairman Vuong Dinh Hue (4th, R) and representatives of businesses (Photo: SGGP)
He asked the Finnish Government to assist Vietnam in human resources training through providing more scholarships to Vietnamese students. There are at present 2,500 Vietnamese students in Finland.
PM Marin took note of the requests of the Vietnamese parliamentary leader, and affirmed that Finland is willing to work with Vietnam to carry out vocational and teachers’ training programmes.
She added that as Finland is facing a shortage of workers due to an aging population, so the country wants to attract foreign labourers, including those from Vietnam, to work in Finland. 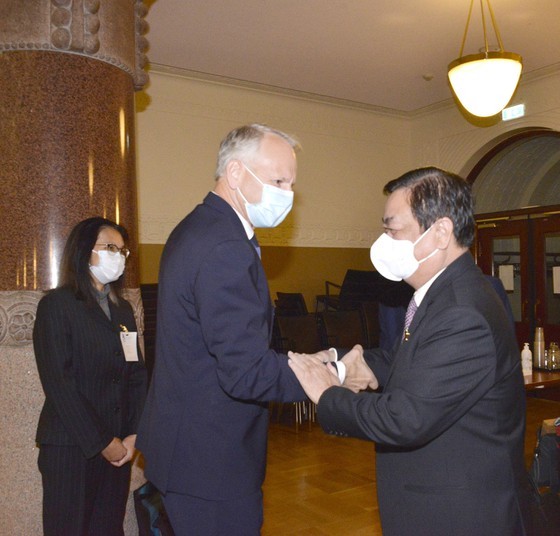 Minister of Agriculture and Rural Development Le Minh Hoan (R) and Finnish Minister of Agriculture and Forestry, Jari Leppa (Photo: SGGP)
The two leaders also discussed cooperation in multilateral mechanisms, and shared the view that the two countries should continue to coordinate and support each other in such mechanisms, including engaging in joint efforts to strengthen the newly-established strategic partnership between the ASEAN and the EU.
They reiterated the principle of the rule-of-law in seas and oceans to maintain peace, stability, freedom, safety and security of navigation and overflight, and to settle disputes by peaceful measures on the basis of international law, including the UN Convention on the Law of the Sea (UNCLOS 1982).