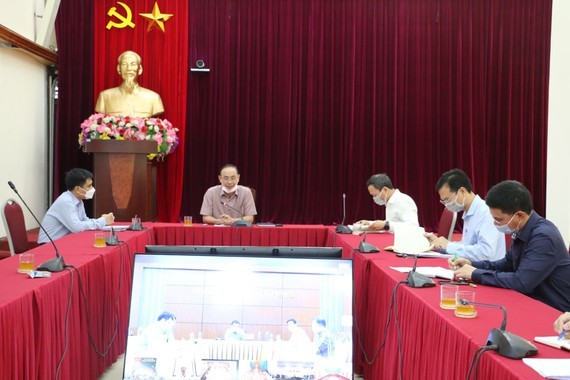 At the online meeting
Yesterday evening, Deputy Minister of Transport Le Dinh Tho chaired an online meeting with the Ministry of Industry and Trade, the Ministry of Agriculture and Rural Development and departments of Transport of provinces and cities on the transport and circulation of goods in new normal conditions when cases of Covid-19 are going down and restrictions put in place to control the virus are being lifted.

At the meeting, localities, especially Hanoi and Ho Chi Minh City, focused on the plan for transport activities in terms of road, railway, aviation, inland waterway, and maritime in the new situation.
According to a representative of the HCMC Department of Transport, the city still maintains the current social distance mandate from now until the end of September. After October 1, the city administration will have various scenarios for three phases including from October 1 to October 31, from November 1 to January 15, 2022, and after January 15, 2022, depending on the development of the epidemic.
The Party Committee and the People's Committee of Ho Chi Minh City will review and forecast the situation providing safety criteria for activities, including transportation. Currently, the Department of Transport in HCMC is developing a draft on traffic for each phase and safety criteria for epidemic prevention in the field of transportation. The Department has also made a list of drivers to transfer to the Department of Health, the Department of Information and Communications for Covid-19 vaccination.
According to information from the Department of Transport of Hanoi, the city is still strengthening the inspection of vehicles through epidemic control points; thereby, police officers have been detecting many drivers using expired test certificates and vehicles failing to meet the regulations. The Hanoi Police Department is also deploying an automatic code scanning camera system at 23 checkpoints.
In particular, the Hanoi Department of Transport is focusing on developing a plan to reopen public and inter-provincial passenger transport routes in each phase in accordance with the regulations on disease control of the health sector.
At the meeting, Deputy Minister of Transport Le Dinh Tho said that the Ministry of Transport is assigning its sub-departments to develop scenarios and plans for traffic in roads, railway, aviation, inland waterway and maritime to guide the implementation in the new situation.
Deputy Minister Le Dinh Tho also requested relevant units to issue drastic punishment on businesses and drivers taking advantage of priority travel papers to carry people and goods illegally.