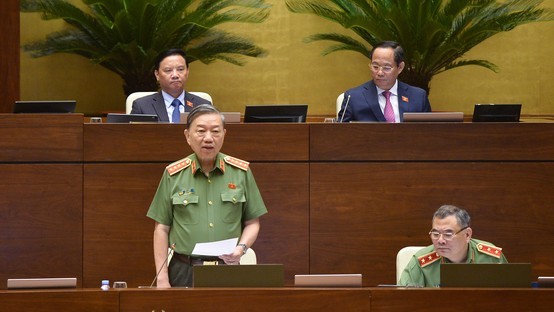 Minister of Public Security Gen. To Lam answers questions from lawmakers on August 10. (Photo: SGGP)
He said the granting of the new passport has been carried out in line with the Law on Exit and Entry of Vietnamese Citizens, adopted by the NA in 2019, and that all details shown in the passport are in accordance with law.
The new passport version matches international practices, he said, noting that many countries also use this design, which doesn’t include the “place of birth”.
The new passport of Vietnam has been accepted by most countries in the world. Spain, which previously didn’t recognise the new version, has recently accepted. Now, only Germany and the Czech Republic haven’t, according to the minister.
Lam explained that some countries refused to accept the new passport without the “place of birth” since they want to know the origin of foreigners coming.
“This is just a technical issue,” he affirmed, adding his ministry has worked out a solution that is relevant agencies adding the “place of birth” in the appendix of passports if their holders wish.
In the long term, if necessary, the Ministry of Public Security will report to the Government and propose the NA revise the Law on Exit and Entry of Vietnamese Citizens in order to add the “place of birth” to passports.
As the ministry is the coordinator, it holds responsibility for this work, the minister said.
In a report sent to legislators prior to the question-and-answer session, he said compared to the old passport, the new version is produced by using modern technology to meet higher security requirements and standards of the International Civil Aviation Organisation (ICAO).
So far, the MPS has granted 272,000 passports of the new version.
In the report, Lam noted according to the ICAO regulations, compulsory information in a passport consists of the type of passport, full name, passport number, date of birth, sex, and passport expiration date. ICAO also gave detailed regulations on the design and layout of information on the page of personal information to ensure consistency among countries in the world.
The new passport version has closely followed the above-mentioned rules and completely met international standards, the minister affirmed.
Explaining why the new passport doesn’t contain information about the place of birth, he said ICAO did not designate other information like the place of birth as mandatory. According to the Law on Exit and Entry of Vietnamese Citizens, information in passports also doesn’t include the place of birth.
On that basis, the MPS issued the new passport version without the place of birth to facilitate citizens’ entry.
In the long term, the MPS will revise the passport design and add the “place of birth” in the page of personal details, Lam noted, adding that it is collecting opinions about this issue from the parliament’s committees for defence - security and legal affairs, the Government Office, the Ministry of Justice, and the Ministry of Foreign Affairs.