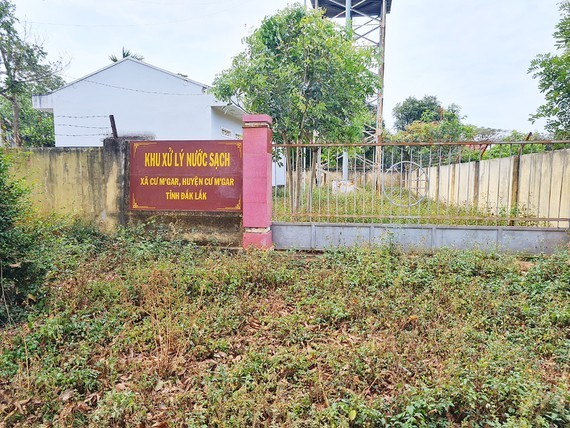 Y Sa Ayun, a resident in Bling Village, said that although his house was less than 50 meters away from the water supply project, his family had not had access to clean water in the past three years. “After the construction was completed, the project only operated for a few months and then stopped completely. We had to dig a well to get water. In the dry season, the well does not have water, so my family has to go down to the stream to carry each bag of water to use. The project cost more than ten billion Vietnamese dongs, but it was abandoned. What a waste," he said.

Mr. Nguyen Quang Dap, Vice Chairman of the People's Committee of Cu M'gar Commune, said that when taking over the clean water project, the communal People's Committee assigned leaders of three villages to manage and operate it. However, due to many problems during the operational process, it had to be stopped. “More than 470 households in three villages registered to connect to the water supply work. However, in reality, only about 280 households use it. The rest use well water or other water sources. Only in the drought season, when wells dry up, will people use water from the project, so the project could not collect enough money for expenditures. As a result, it has to stop operation," said Mr. Dap.

According to Mr. Dap, the communal People's Committee has now signed a contract with a unit with experience in operating water supply works to have a solution to serve the needs of local people.

Mr. Pham Ngoc Binh, Director of the Center for Rural Clean Water and Sanitation in Dak Lak Province, said that the province had 122 clean water supply works. Of which, 36 are inactive and abandoned because they are small-sized projects with few users, while high operating costs made revenue not enough for spending. In addition, because most of the water supply works were assigned to the commune level for management, the operators were not professional. Therefore, the projects had to cease operations because of no profits.

Talking about solutions, Mr. Pham Ngoc Binh said that the center had been coordinating with localities to review and plan to resume operations of suspended water supply works.

“If the water supply works are close to each other, we will upgrade the pipeline to increase the scale of water supply and add more households to reduce operating costs,” Mr. Binh added.