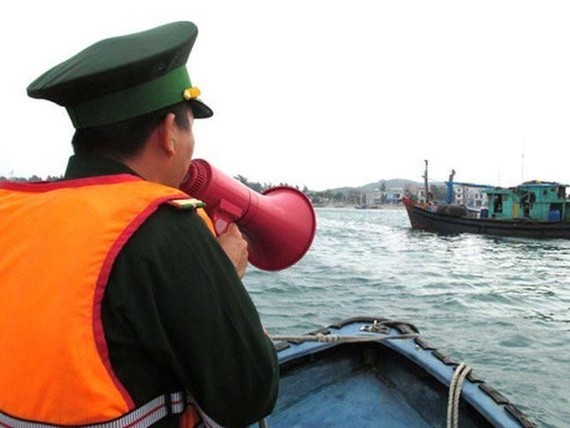 The Standing Office of the National Steering Committee for Natural Disaster Prevention and Control also held a meeting to deploy solutions to respond to a tropical depression that is likely to intensify into a storm on August 9 in Hanoi.

According to Quick Report No.274 of the Commanding Committee for Natural Disaster Prevention and Control and Search and Rescue and Border Guard, by 7 a.m. on August 9, the coast guard had guided 52,108 vessels with 229,262 people to actively move to avoid the tropical depression. Specifically, there were 298 ships with 2,137 people in the North East Sea area, including the Hoang Sa archipelago, 7,927 ships, with 38,979 people in other areas, and 43,883 ships anchored at wharves with 188,146 people.

There are still 18 vessels with 113 people in the danger zones, including Da Nang, with 17 ships and 105 people, and Binh Dinh, with one ship and eight people.

According to the report of Quang Binh Province, the ship QB 98084 TS with four fishermen encountered technical problems at the coordinates of 15.13 degrees North latitude and 109 degrees East longitude due to gearbox failure, so it was left to drift, and the ship QB 98215 TS with five fishers encountered engine failure. These two ships, which require urgent assistance due to the strong winds of levels 5 and 6, are currently being towed by the Coast Guard vessel CS-2014 and the Fisheries Surveillance vessel KN-336, expected to return to the shore today.

Rain and wind that occurred from August 8 to 9 killed one person in Nghe An and unroofed and damaged 34 houses in the Mekong Delta.

In the Dispatch No.23, Minister Le Minh Hoan requested coastal provinces and cities from Quang Ninh to Khanh Hoa to notify owners of vehicles and captains of ships and boats operating at sea of the location, movement direction, and evolution of the tropical depression to actively avoid, escape or not move into danger areas.

The location of the tropical depression at 7 a.m. on August 9. (Photo: SGGP)
The dispatch also requested the Ministry of Natural Resources and Environment to promptly provide information on tropical depression developments to proactively implement response measures. The Ministry of Foreign Affairs contacts countries in the region to ask them to create favorable conditions for fishers and fishing vessels to take shelter, support, and rescue when required. The Ministry of National Defense directs border guards to count, call, and guide ships to exit dangerous areas, review the plan, and be ready to deploy forces and means to support search and rescue and remedial work at the request of the locality.

The Ministry of Public Security directs local agencies to ensure fire safety and social order at anchorage and shelter areas. The Ministry of Agriculture and Rural Development instructs the work of ensuring the safety of fishing vessels, organizes reinforcement, and prepares plans to ensure safety for aquaculture zones.

The Ministry of Information and Communications directs network operators and local mass media agencies to ensure communication for response work, direct local agencies to increase sharing and guidance on the prevention of tropical depressions and storms, and give priority to broadcast warnings and response instructions.

On the morning of August 9, Mr. Tran Duc Thinh, Chief of the Office of the Commanding Committee for Natural Disaster Prevention and Search and Rescue of Ha Tinh Province, said that it sent an urgent dispatch requesting the National Committee for Natural Disaster Response and Search and Rescue mobilize forces and means to support the search and rescue of fishing vessel HT 20408 TS which had an accident at sea in Ha Tinh.

Although it passed 9 a.m. on August 9, authorities still could not contact the fishing boat HT 20408 TS.

At 4.05 p.m. on August 8, the fishing boat of Nguyen Van Hai, a fisher in Xuan Phuong Village, Thach Kim Commune, Loc Ha District, Ha Tinh Province, with the number HT 20408 TS, engaged in fishing in the water of Ha Tinh Province, with five crew members. In the process of fishing and moving about 20 nautical miles from the shore, the boat faced an engine breakdown and could not move. The boat's owner has not been able to contact nearby vessels to assist with towing while the weather at sea is stormy.