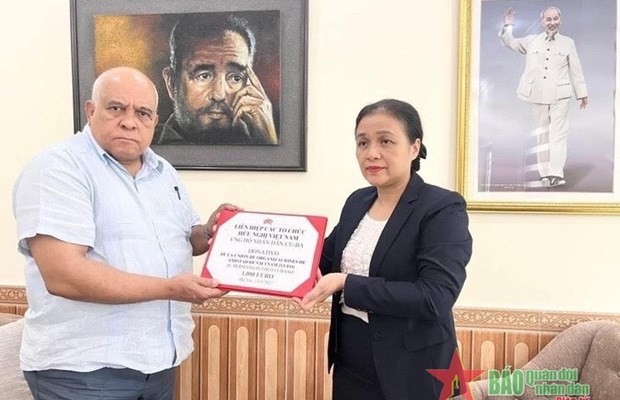 The letter said the fraternal Cuban country and people are struggling against countless difficulties and challenges as they continue to be under a strict embargo amid Covid-19 pandemic, especially a recent oil storage facility fire incident at an industrial zone near Matanzas that seriously hit lives of the Cuban people.

On the back of special solidarity between the two Parties, States and peoples, fine tradition of Vietnam and positive results in supporting the Cuban people in face of Covid-19, the VCFA called on ministries, departments, mass organisations, agencies, businesses, cities and provinces, individuals and organisations, philanthropists and lovers of Cuba to join hands to continue assisting them.

The VCFA will receive donations till August 31.

On the occasion, Nga handed over EUR1,000 raised by VUFO’s officials and staff to help Cuban people ease difficulties.

The VCFA’s Club of Vietnamese Alumni in Cuba also launched a fundraising campaign on August 8, and has so far raised nearly VND1 billion (US$43,400) in support of the Cuban people.