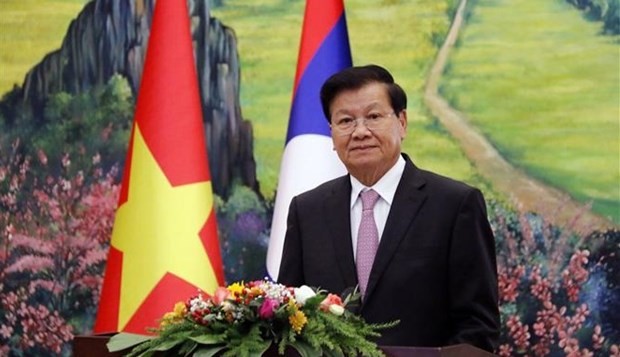 General Secretary of the Lao People's Revolutionary Party Central Committee and President of Laos Thongloun Sisoulith (Photo: VNA)
In an interview granted to the Lao and Vietnamese press in Vientiane on the occasion of the 60th founding anniversary of the Vietnam-Laos diplomatic relations (September 5, 1962-2022) and 45 years of the Vietnam-Laos Treaty of Amity and Cooperation (July 18, 1977-2022), the Lao leader highlighted the importance of the establishment of Laos – Vietnam diplomatic ties.
The establishment of diplomatic relations between Vietnam and Laos in 1962 was a great diplomatic victory of the two countries’ revolutions, he stressed, noting that it was the outcome of their struggle on both political and diplomatic fronts and military front
The Lao leader affirmed that his country always considers its great friendship, special solidarity, and fighting alliance with the Communist Party of Vietnam (CPV), and the Vietnamese army and people, a decisive force for all its victories.
To further strengthen the great friendship, special solidarity and comprehensive cooperation between the two countries, Sisoulith underlined the need for the two countries to continue to support each other; exchange lessons, experience, knowledge, skills; and create conditions for each other in socio-economic development; thus growing forward together and further promoting their relations for the sake of the two people.
Laos and Vietnam should continue to implement agreements signed by leaders of the two parties and governments, contributing to realizing goals set by the two sides, especially in economic cooperation, he said.
The two countries should also pay attention to fostering socio-culture cooperation, improving their cooperation in human resources development, and in addressing problems that may cause negative phenomena along border areas of the two countries, he noted.
The Lao leader also emphasized the necessity to educate the two countries’ people, especially young generations, on the history of bilateral friendship and pure solidarity between the two nations. He called on Lao and Vietnamese people from all walks of life to join hands and unite to together protect their revolutionary achievements, contributing to promoting prosperous and sustainable development in each country.