In a recent interview with the Vietnam News Agency’s reporter, the Lao diplomat looked back on the historical significance of the CPV’s foundation on February 3, 1930 as well as its important role in leading the people in the cause of national protection and development.

He particularly laid stress on the CPV’s introduction of the “Doi Moi” (renewal) policy in 1986, holding that it played a crucial part in the country’s stable politics, impressive economic growth, and improved living conditions of people.

Despite rapid and complicated developments in the global and regional situation in the past five years, Vietnam has attained remarkable achievements in various sectors thanks to the Party, State and people's high determination and efforts, the ambassador said. 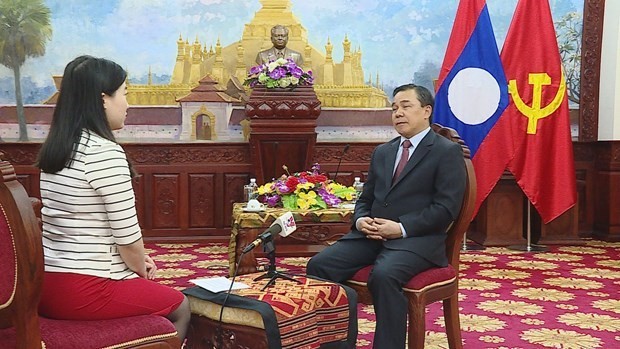 Vietnam is one of the 10 countries in the world posting the highest economic growth, with an annual average GDP growth rate of 5.9 percent in the past five years, he said, adding that without the COVID-19 pandemic, the nation’s economy could have expanded by over 7 percent.

Along with resounding successes in the fields of culture-society, healthcare, education and science-technology, Vietnam has seen breakthrough progress in external affairs and international integration, helping improve the nation’s prestige in the region and the world, he stressed.

Although the nation was battered by COVID-19 and natural disasters in 2020, the country successfully fulfilled its roles as the ASEAN Chair 2020 and AIPA-41 Chair, and did a good job as a non-permanent member of the United Nations Security Council for the 2020-2021 tenure.

These achievements are a vivid illustration of the CPV’s sound and ingenious leadership in the past year, he underscored.

The Lao diplomat also spoke highly of Vietnam’s meticulous preparations for the upcoming 13th National Party Congress, with a bundle of draft documents compiled based on opinion collection from researchers, officials, Party members and people from all walks of life.

He expressed his strong belief that the 13th National Party Congress will have rosy impacts on the country’s socio-economy in the coming time, adding Vietnam will realise its development goals of becoming an upper middle-income nation by 2030, and a high-income nation by 2045.

The ambassador said the 13th National Party Congress has received special attention from all Party members, officials, soldiers and people in the country, as well as international friends.

The CPV has paid due attention to promoting democracy, transparency and compliance with current regulations, with documents to be submitted to the congress being introduced to all Party members, officials, and people through various means of media, he stressed.