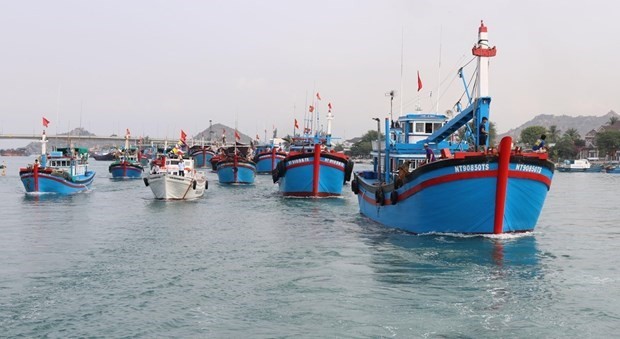 This move is expected to help develop responsible fisheries, and effectively and sustainably exploit aquatic resources on fishing grounds, towards having the European Commission's warnings against IUU fishing removed in the two localities.
Accordingly, Kien Giang and Ca Mau have jointly organised patrols and inspections to detect fishing vessels engaging in illegal fishing, especially in foreign waters, those using electric pulse and explosives to catch aquatic products, those operating in wrong areas, and the ones that have not installed monitoring devices or have installed but often cut connection.

In addition, they have also paid attention to stepping up dissemination of law to raise awareness of ship owners and fishermen on IUU fishing, and strictly punished those violated.

Border guards of the two provinces have well performed the inspection and control of vessels at border checkpoints, and resolutely not allowed those that lack procedures, papers and equipment as prescribed to go out to sea.

According to the steering committee on IUU fishing prevention of Kien Giang province, after 2 years of coordination, the two provinces’ forces organised patrols and inspected more than 100 fishing vessels in their waters, made records of 41 administrative violations, and discovered 47 vessel monitoring devices that were removed and sent to other vehicles or left onshore or on islands.

Through inspections, the forces have sanctioned administrative violations of more than VND7.8 billion (US$333,400).