Mr. Tran Van Lau, Chairman of the People's Committee of Soc Trang Province, inspects wind power projects. (Photo: SGGP)
Up to now, despite facing many difficulties due to the Covid-19 pandemic, Soc Trang Province had four projects completed and put into commercial operation in 2021, with 26 wind turbines with a total capacity of 110.8 MW. Currently, the province is constructing seven other projects, including 102 wind turbines with a total capacity of more than 320 MW in Vinh Chau Town.

According to a report by the People's Committee of Vinh Chau Town, wind power projects have been facing certain difficulties. Specifically, local people have prevented the installation of the 110 kV and 220 kV transmission lines; some wind turbine propellers have not been constructed yet due to problems with safety corridors; people placed obstacles to prevent the construction at some temporary culverts for water supply and drainage within the project scope; the security and order situation related to wind power projects arose many complicated cases and hot spots.

Noticeably, more and more cases where households continuously gather many people to prevent the construction in order to claim unfounded rights and demands. Typically, at Wind Power Project No.2 in Vinh Phuoc Ward in Vinh Chau Town, two households asked the investor to compensate VND25 billion for about 200 square meters of propeller safety corridor.

After inspecting and checking the reality of wind power projects, the Chairman of Soc Trang Provincial People's Committee requested the investor, construction contractor, and local authorities to coordinate to solve the arisen problems, thereby, creating a consensus and agreement to definitively resolve the complaints and disputes of the people, not leaving them stagnant or prolonged. 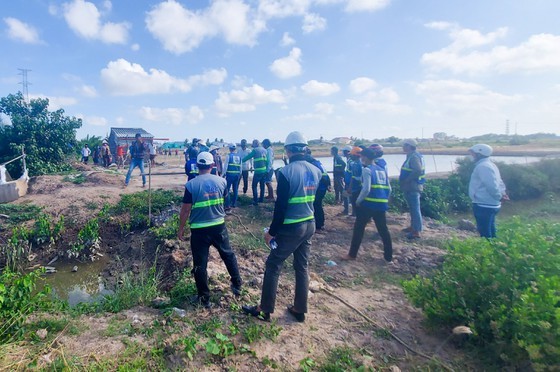 Local people obstruct the installation of the 220 kV transmission line in Lac Hoa 2 Project in Vinh Chau Town. (Photo: SGGP)
On the investor's side, the construction unit needs to rectify and stop arbitrarily agreeing to compensate and support households in the project. Instead, it must go through the local government to avoid complaints, affecting security and order.

As for the local authorities, it is necessary to urgently propagate, encourage, and explain to local people, for them to correctly and accurately understand the compensation and support policies so that they can comply and stop making unreasonable requests. Especially, during the dialogue process, local authorities must create confidence for people, publicly and transparently list compensation, support, and resettlement policies; propagate the role and significance of wind power projects for the development of the province for the sharing, consensus, and support from local people.

The Chairman of Soc Trang Provincial People's Committee said that the province's point of view is to harmonize the interests of local people and investors based on the provisions of the law. In addition, people who cause riots, intentionally obstruct, and make unreasonable and illegal claims must be strictly handled, following the law.